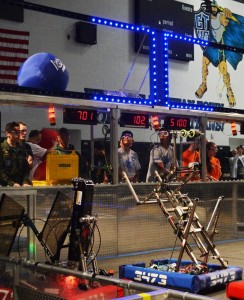 The robot was programmed to score points in either high or low goals at the opposing sides of the arena. The team ranked  #2 early in the competition with a score of 140 points – the highest in the entire competition! Team Sprocket finished in 16th place after incurring then fixing some mechanical issues. The team fund-raised, built and programmed their robot to perform FRC described tasks against a field of competitors under the strict FRC competition rules. Volunteer professional mentors lend their expertise to guide the team.

“Not only are the students building a championship-winning robot, they are learning about science, technology, computer programming, managing finances and budgets, and learning to motivate others. These lessons are the real things that students get from FRC competitions and these are the things they will be able to retain and use for the rest of their lives,” said mentor Boeing engineer Clark Rucker.

Team Sprocket is now ready to for their final competition of the season and looking forward to bringing home a trophy to the Walnut Valley Unified School District!

“Since the last competition, our team has made some mechanical and programming adjustments and have been practicing every day for at least three hours to get ready for the Las Vegas tournament,” said Spirit Captain Alice Chen.