A judge sentenced a former Diamond Bar middle school teacher to more than 15 years in prison Thursday for carrying on a sexual relationship with a 14-year-old student, officials said.

A jury convicted Andrews in March of 17 felony counts related to the a sexual relationship he had with a student between May 2011 and his his Sept. 20, 2011, arrest, authorities said.

Camacho additionally ordered Andrews to register as a sex offender for the rest of his life, Ardalani said.

Andrews first met his victim at school when she was 13 years old, investigators said. “The defendant taught the victim for about a year before the sexual misconduct began,” Ardalani said in a written statement. “Initially, the incidents transpired at the school, but later also occurred off-campus.”

The crimes came to light when another teacher at the school became suspicious of Andrews’ interactions with the girl and notified the Los Angeles County Sheriff’s Department, she added.

Andrews was placed on leave from the Pomona Unified School District a day before his arrest when school officials learned of the allegations, district officials said. He was fired in December of 2012.

The investigation was handled by the Sheriff’s Special Victims Bureau.

A jury convicted an Ontario man of the Aug. 17, 2013 fatal stabbing of his girlfriend’s brother in Rowland Heights, officials said Wednesday.

Sarah Ardalani, spokeswoman for the District Attorney’s Office, said jurors on Tuesday found 31-year-old Albert Camacho guilty of voluntary manslaughter and of assault. They acquitted him of four counts of dissuading a witness, she added.

Camacho will be sentenced Oct. 3 at Pomona Superior Court.

Sheriff’s detectives said Camacho and Benjamin Cervantes were arguing on Aug. 17, 2013 at Cervantes’ home in the 1400 block of Gloriosa Avenue in Rowland Heights.

According to detectives, Camacho allegedly threatened to harm neighbors who witnessed the stabbing if they called authorities. He left the scene. Camacho later turned himself in to the sheriff’s Walnut/Diamond Bar station.

The changing world poses some great challenges to families today. St. Lorenzo Ruiz Catholic Church in Walnut is responding to the challenge by spearheading a Summit on Today’s Marriage and Family Life on Sept. 12-14.
The local church hopes to reach hundreds of men and women from the Archdiocese of Los Angeles and nearby dioceses. A free Praise Concert will open the summit on Friday night from 5pm to 11pm.
The Summit Proper on Saturday, from 7am to 10pm, will be highlighted by talks and open forums with Bishop Emeritus Ted Bacani from the Philippines as keynote speaker. A group wedding at 3:30 pm culminates the weekend followed by closing ceremo-
nies from 5pm to 6pm.

The Nogales High School Community Library hours opens today to serve the community with a variety of programs and resources for all ages. The community may park in the school lot, enter through the “H” building pass way, to the library located on the left. (Nogales High School is located at 401 S. Nogales Street, La Puente, CA 91744).

A person was injured Thursday after being hit by a car that police are investigating as a possible DUI, California Highway Patrol officials said.

The crash occurred about 7:35 p.m. on Valencia Street and Otterbein Avenue when the vehicle hit a parked car and the unidentified individual walking near Rowland High School, Officer Art Rubio said.

A witness said the car hit a female pedestrian and pinned her between the school’s fence and the vehicle.

Rubio could not confirm if the car crashed through the school’s fence.

Valencia Street was closed between Otterbein and Edmore avenues.

As of 9 p.m., officers were still on scene investigating.

No arrests have been made.

Received a lovely note from Vejar Elementary in Walnut:

Thanks again for supporting us with our Have a Heart campaign for Andrew Osorio.

Andrew is currently in ICU at Children’s hospital.  He has been moved to the top of the transplant list.  Our prayers are with him.  Mom reports that he really wants to get out of the hospital because he says, “it’s time to go to school.”

On Sept. 17 at 7 pm I am making a presentation to the board highlighting a star student from Vejar and community members who have made specific contributions to Vejar.

I am going to honor Andrew as our star student for his bravery, his hard work, and his positive attitude that exemplify not just the Vejar Values, but a strong human spirit.

Additionally, I would like to honor you and Kelli Gile as Vejar’s community helpers.  You both went out of your way to publicize our fundraiser to help Andrew’s family.

You spoke with him and the family with a kindness and empathy that helped all feel at ease.  As a result of the hard work of Andrew’s teacher and your publicity, we were able to give the family almost $3000 from the Vejar Community to help with their expenses related to his health.

I hope that you will join us at the board presentation on Sept. 17 at 7 pm  at the WVUSD district board room.

As a part to get the staff in shape and encourage better health, the Los Angeles County Sheriff’s Department begins its annual battle of the bulge.

Four teams have joined the Battle of the Badges to see who can lose the most weight over the next 10 weeks. The official weigh-in took place Thursday.

All 45 competitors will be a winner in the long run. Many are like Sgt. Annadennise Briz, a resident of Diamond Bar.

“I’m tired of the extra weight, I haven’t weighed this much since I was pregnant with my last child,” the 47-year-old admitted.

Briz works in the County Services Bureau in downtown Los Angeles. She is a hostage negotiator.

“I helped with the man who threatened to jump off the overpass in East L.A., closing the freeway for hours,” Briz said.

Despite her high-stress job, Briz agrees “it’s just laziness, it’s so easy to grab something quick to eat rather than make something healthy.”

She’ll join her brothers and sisters in the department as they shed unwanted pounds. They’ll follow the Lindora weight loss program to lose 10 percent of their body weight in 10 weeks.

The program includes diet, moderate exercise and motivational tools. The cost is being paid for by the Lean For Life Foundation, Lindora’s nonprofit group that promotes obesity research.

“One of our hopes in establishing Battle of the Badges was to create healthy heroes out of our participants,” said Lindora CEO Cynthia Stamper Graff, whose new book “The New Lean For Life” was given to all the participants.

“My three daughters are so fit and they want me to live a healthier lifestyle,” Briz said. “I’ve already started jogging three miles with a friend three or four times a week. I also want to join a gym in Diamond Bar.”

The busy sheriff’s deputy hopes it will help with her cholesterol.

The Los Angeles region depends largely on scarce and expensive imported water, and the bond funds could help reverse that dependence by increasing the local supply, experts say. At the same time, the money could help restore native rivers, improve water quality, capture stormwater runoff and even build some parks.

“It makes more sense to the community to increase our local self-reliance,” said Nancy Steele, executive director of the Council for Watershed Health in downtown Los Angeles. “This is a good investment by the public in our water infrastructure, and in our natural landscape.” 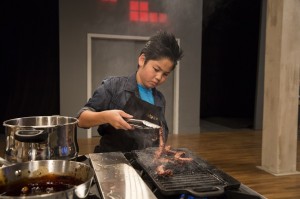