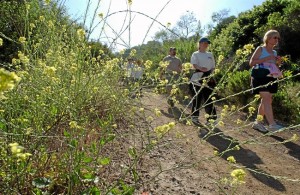 Puente Hills Habitat will celebrate its 20th anniversary at the Hacienda Heights trail head on Saturday from 9 a.m. to 1 p.m. There will be fun crafts, face painting, displays and prizes. Winners of the photo and essay contests will be announced.

“We want to thank Hacienda Heights, Rowland Heights and Whittier for their support over the past two decades,” said Executive Director Andrea Gullo.

The agency manages 3,800 acres in the Puente Hills Preserve. The park runs from the intersection of the 605 and 60 Freeways east to Harbor Boulevard.

Over the past two decades, the authority has purchased 1,888 acres of land for $30 million and manages land owned by Whittier and the Sanitation Districts of Los Angeles County. The money came from fees charged by the now closed Puente Hills Landfill.

The 20th anniversary begins at 9 a.m. with an easy 1/2 mile family hike led by a naturalist. Others can take a two-mile hike to learn about native herbs.

Habitat ecologist Lizette Longacre says hikers will explore the coastal sage scrub threatened with extinction in Southern California. The rare plant can be found in Hellman Park and the Arroyo San Miguel, as well as Sycamore and Powder Canyons.

“The preserve also has one of the largest stands of Walnut trees,” Gullo noted. “The California Black Walnut is the most common and can be found in Powder Canyon.”

Tall coast live oaks also grow on the park’s slopes and grasslands. The walnut and oak trees are important sources of food for the local wildlife.

“Several sightings of mountain lions have been confirmed,” said Gullo. “One of our rangers saw one in Sycamore Canyon.”

The big cats are drawn by many deer living in the preserve.

“We have a healthy ecology here, with lots of rabbits and deer,” Longacre agreed.

“We put in Los Angeles’ first wildlife underpass,” Gullo boasted. “And it has really cut back on the road kill.”