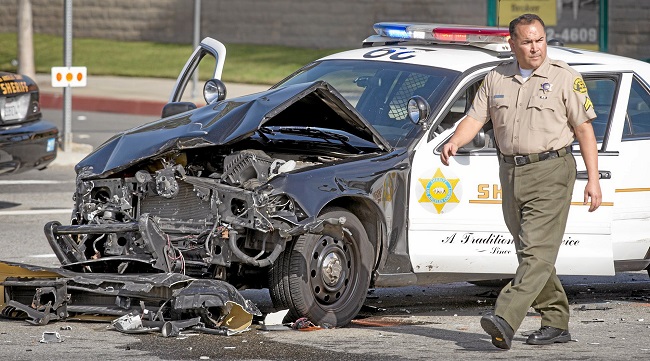 A deputy and a motorist were injured after a patrol car collided with a sedan Tuesday afternoon. The crash happened just before 12:30 p.m.

Lt. John Saleeby of the sheriff’s Walnut/Diamond Bar station said the deputy was responding to a rescue call in Diamond Bar when the patrol car became involved in a traffic collision at Grand Avenue and South Diamond Bar Boulevard.

He didn’t have details about how the crash occurred. The deputy was shaken up and complained of neck pain, Saleeby said. He said the man driving the sedan also complained of pain.

Los Angeles County Fire Inspector Randall Wright said the crash was reported to the fire department as a traffic collision with persons trapped. He said no one was trapped.

Both the deputy and the driver were transported to a hospital. Lt. Edward Wells said the deputy was treated and released. He didn’t know if the driver is still in the hospital.

The deputy has been with the sheriff’s department for 15 years.