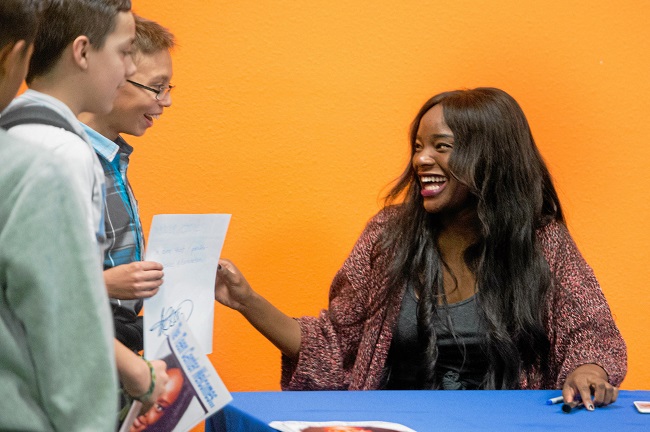 Walnut teens made it very clear that they have their own “American Idol.” The middle-schoolers packed the Teen Center on Tuesday to talk to contestant Adanna Duru.

The 18-year-old Diamond Bar resident wowed the celebrity judges with her rendition of “You And I” by Lady Gaga. The trio said “yes” to the young woman, who is in the advanced cutthroat competition, which aired Wednesday. She also will be in next week’s show.

“I thought you sounded great … you hit every great part of your voice, which sounds like all of it,” agreed judge Keith Urban.

Duru said she even got a Tweet from Lady Gaga saying, “You killed it!”

The 2014 Walnut High grad took time out of her busy schedule to talk to the local teens. Duru is studying at UC Riverside.

Many remembered Duru competing in season three of “The Voice.” She was a sophomore at the time.

“I just wanted to be a singer. I didn’t know what type of music I wanted to make,” Duru recalled. “Since then, I’ve learned so much and being on the show now I know everything I want to do. It’s been so fun so far.”

The rising star reminisced about going to Suzanne Middle School just down the road in Walnut. There she joined the casts of “Willy Wonka” and “Alice in Wonderland.”