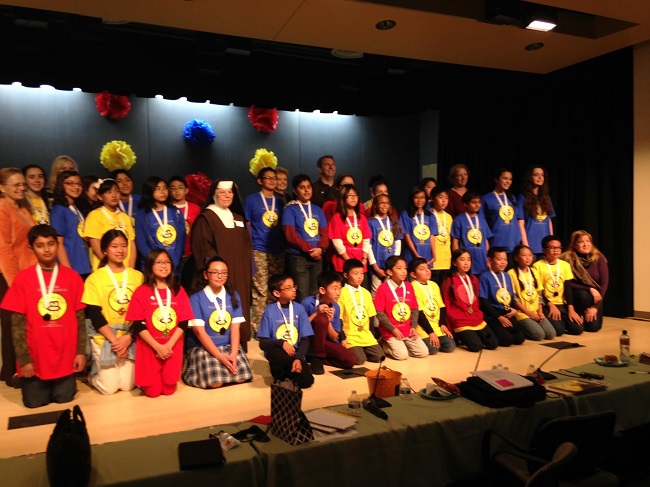 Facing the possibility of heavy rain on the day of the preliminaries, the volunteers of the Inland Valley Regional Spelling Bee planned for the worst. But as luck would have it, partly cloudy skies and bright sunshine  prevailed.

Excited spellers and their families, friends and teachers piled into the Design Technology Center at Mt. SAC early Saturday morning.After the throngs of school champions were registered and given their T-shirts, they lined up and marched into the auditorium to the strains of their favorite music.

Marsha Hawkins, Spelling Bee Director introduced the announcer Ken Mok, who explained what was going to happen that day. The spellers were separated into their red, blue and yellow color groups and escorted to their venues – written spelling, written vocabulary or oral spelling.After three tense hours the tests were corrected and the points were tallied. The excited spellers were asked to come up to the stage where they were presented with medallions signifying their successful advancement to the final rounds.These lucky spellers will spend this week studying hard and fast to be ready to face their competitors early Saturday morning, March 7.Among those advancing to the finals are Rebecca Norden-Bright of Pioneer Jr. High in Upland, who has participated for the last six years, Hannah Sylvestro of St. Margaret Mary School in Chino, our champion in 2013 and Thordar Han of South Point Middle School in Diamond Bar who is making her second appearance at the Bee.The finals will take place at 8 a.m. in the auditorium at the DTC. All 35 finalists will be seated on stage, where they will be called up one at a time to spell their word.

If they are correct, they will sit back down. If they fail to spell correctly, they will join their parents in the audience. This will go on until one student is able to out-spell all the others.

The finals of the IVRSB have always been exciting and the children are the show. They are funny, bright, excited and above all dedicated.