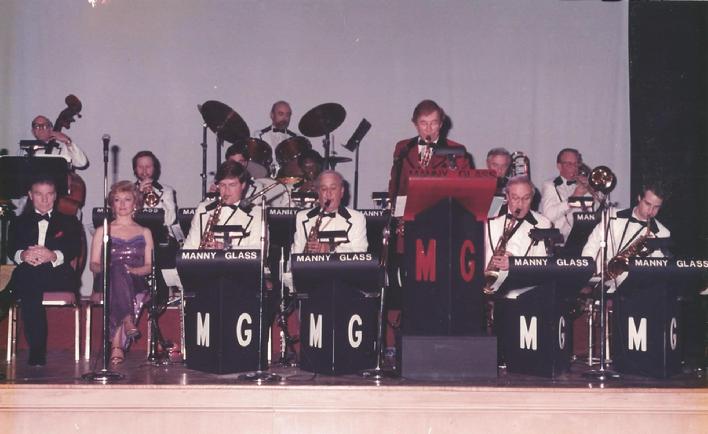 The Manny Glass  big band orchestra began the Puente Hills Concerts in the Park series last night in Schabarum Park. The orchestra played patriotic music to celebrate the Fourth of July. They are also known for playing popular tunes from the 40’s big band era.

This summer’s lineup of musicians is sure to offer something for everyone! The series will offer new bands and sounds, as well as bringing back the year-to-year favorites!

Be sure and leave Tuesday nights open from 7 to 9 p.m. on your calendar this summer – you won’t want to miss a moment of the fun!

Puente Hills Concerts in the Park will celebrate its 20th anniversary beginning July 1 with the big band sound of Manny Glass Band.
The orchestra will kick-off the concert in the park series by playing patriotic music to celebrate the Fourth of July. They are known for playing popular tunes from the 40s big band era.
Summer concerts will be held 7-9 p.m. Tuesday nights until Aug. 12 at Peter F. Schabarum Regional Park, 17250 E. Colima Road, Rowland Heights. Admission and parking are free. Food, beverages and desserts are available.
This summer will showcase an extraordinary talent of musicians, bands and entertainers.
Supported by Los Angeles County Parks and Recreation Department and Supervisor Don Knabe, Concerts in the Park is a great way to spend your Tuesday evenings with family, friends and community.
Upcoming concerts will feature:
July 8: Mariachi Reyna de Los Angeles, America’s first all-female mariachi ensemble, which brings sensitivity, beauty, warmth and an attractive perspective to the realm of Mexico’s musical heritage.
July 15: Hot August Night with Dean Colley, a Neil Diamond tribute band.
July 22: Vaud and the Villains, a 19-piece 1930s New Orleans orchestra and cabaret, at once seedy and inspiring, gritty and sublime.
July 29: Beatles vs. Stones — A Musical Shootout. The British Invasion brought us the two most popular rock groups of all time, the Beatles and the Rolling Stones, as well as the liveliest debate in rock history — which band is the greatest? These two legendary bands will engage in a musical “shoot out of the hits” featuring internationally renowned tribute bands, Abbey Road and Jumping Jack Flash. Six alternating power sets with the two bands coming together on stage for an amazing encore makes this show a once-in-a-lifetime event.
Aug. 5: Cold Duck. In 1969, trumpet player/vocalist Jose Cuadra assembled a group of musicians to form an eight-piece band known today as Cold Duck, considered Southern California’s premier dance band.
Aug. 12: Three Mo’ Tenors is an extraordinary musical event, featuring 10 styles of music from opera, to jazz, to Broadway and more.
For more information on concert dates, times and park hours, visit www.concertsinthepark.com or call the Schabarum park office at 626-854-5560.

Understanding that emergencies and disasters can happen at any moment, Los Angeles County Supervisor Don Knabe is inviting residents to learn valuable life-saving skills at a free community emergency preparedness fair on Saturday June 21 from 10 a.m. to 2 p.m. at Schabarum Regional Park in Rowland Heights.

“We live in a region that is susceptible to fires and earthquakes, and residents must be prudent in ensuring they are ready in case of an emergency,” said Supervisor Knabe. “I encourage all residents to attend this free event, because in the event of a disaster, it’s critical to have a plan to get themselves and their families out of harm’s way.”

A representative from Cal Tech will deliver a keynote address on earthquake preparation in southern California. Fair attendees will also have the opportunity to purchase emergency equipment and supplies, including first aid kits, water, food, and generators.

Los Angeles County Sheriff’s deputies will host a National Night Out event in conjunction with the Puente Hills Concerts in the Park. It will begin at 6 p.m. at Schabarum Regional Park, 17250 Colima Road.