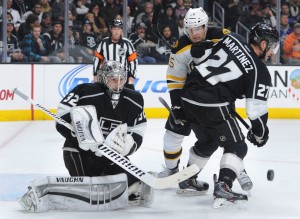 Kings goaltender Jonathan Quick broke his own franchise record with his 40th victory of the season on Thursday, a grinding 2-1 win over the Ducks. He can’t catch league leader Braden Holtby of the Washington Capitals, who needs one to tie the NHL record of 48 wins in a season.

Quick said he would be pulling for Holtby, though.

It’s one of those goaltenders’ union sorts of deals.

There’s also the fact that the Kings might need the Capitals to defeat the Ducks on Sunday in Washington in order to clinch the Pacific Division championship. The Kings can sew up their first division title since 1990-91 with a win Saturday over the Winnipeg Jets in their regular-season finale.

“That’s almost a month worth of wins,” Quick said of the difference between his 40-23-4 mark compared to Holtby’s 47-9-7 record. “It’s impressive that he’s in the mix for that. Sunday night, we’re for sure pulling for him. Just to be in that mix and what he’s already accomplished is incredible.”

In addition, Quick and the Kings are in the running for the Jennings Trophy as the team with the fewest goals given up. The Kings (191 goals) are third behind the Ducks (189) and the Capitals (190) with one game to play. The Ducks and Capitals had two to go.

Quick isn’t one to talk about individual accomplishments or personal performances, but a handful of reporters caught him in a chatty mood Friday at the Kings’ El Segundo training facility. He said winning the Jennings would be meaningful because his teammates aided him so much this season.

“When you have a good team in front of you, it helps you out a real lot,” he said. “There have been quite a few games this year when I didn’t feel on my game and had the luxury of seeing only 15 or 20 shots. That goes a long way over the course of a year. Guys battle and compete and it makes you want to compete a little harder. When you have everyone doing that it helps the win total.”

Defense is always a Kings priority under coach Darryl Sutter and this season is no exception.

“It started with coaches making us take pride in it and making us realize we win our games when we play really well defensively and give up less chances and less goals,” Quick said. “I think the past five, six years, the Cup winners have been in the (Jennings) mix every year.

“You’ve got to be able to win low-scoring games. If you’ve grown accustomed to that, it helps a lot. Something we’ve been trying to focus on is blocking shots and penalty kill and stuff like that. The guys have done a great job. It’s something we’ve grown to expect from each other. It’s certainly one of the staples in our game when we’re playing well.”