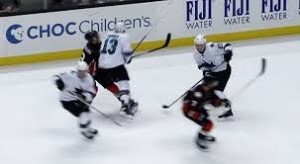 Here is the full statement Thursday from the San Jose Sharks’ Raffi Torres:

“I accept the 41-game suspension handed down to me by the NHL’s Department of Player Safety. I worked extremely hard over the last two years following reconstructive knee surgery to resume my NHL career, and this is the last thing I wanted to happen. I am disappointed I have put myself in a position to be suspended again. I sincerely apologize to Jakob for the hit that led to this suspension, and I’m extremely thankful that he wasn’t seriously injured as a result of the play. I also want to apologize to my Sharks teammates and the organization.”

Per the Ducks, Silfverberg practiced with the team for the first time since Torres’ first-period hit in last Saturday’s exhibition forced him from the game. Silfverberg is expected to play in Saturday’s regular-season opener at San Jose.

Kings captain Dustin Brown and left wing Milan Lucic avoided supplementary discipline from the NHL on Thursday after delivering a couple of debatable hits during Wednesday’s 5-1 season-opening loss to the San Jose Sharks at Staples Center.

Brown and Lucic each cracked the Sharks’ Logan Couture. Brown wasn’t penalized for what looked like a head-butt in the first period and Lucic received a match penalty in the third for charging after Couture and thumping him after receiving a hard, low but legal check moments earlier.

“I didn’t even know it was a big deal, really, until after the game,” Brown said. “I stopped. He was going north and I was going south. It wasn’t anything I thought was bad on the ice. You know on the ice when it’s borderline or not.”

Lucic’s match penalty resulted in an automatic suspension, pending a review by the league. The department of player safety then determined further punishment was not warranted and Lucic is free to join Brown and the rest of the Kings to play Friday against the Arizona Coyotes.

“I think that’s why I got a match, just because of who I am,” Lucic said. “If I made that hit (that Couture made) and someone came after me that way, he wouldn’t have gotten a match. It just comes with who you are. They review all that stuff, and there’s nothing that’s come of it.”

Milan Lucic didn’t want to say much about his late-game hit on the San Jose Sharks’ Logan Couture, which resulted in a match penalty and an indefinite suspension by the NHL, pending a review. He did say he believed the Kings’ 5-1 loss was perhaps “a good kick in the butt” they need to “wake up and play a lot better because it’s never to soon to get going in the right direction.”

With the Kings down 5-1 late in the third period, Couture exited the penalty box and cracked an unsuspecting Lucic with a low check in the neutral zone. Couture had been penalized for interference on goaltender Jonathan Quick. After hitting Lucic, he skated to the Sharks bench and appeared to laugh at his rival. Lucic then charged at Couture, drawing a penalty.

“Just a low hit,” Lucic said of Couture’s check, which was not penalized. “I didn’t like it, so I reacted to it. I don’t know why I got a match penalty. I didn’t cross any line. So, obviously, I deserved a penalty. I don’t know why it was called a match penalty. At the end of the day, I don’t care who it is on the other side, if you hit someone like that you could easily injure someone. It doesn’t matter what the situation is, I’m definitely going to react to it.”

Key moment: Kings defenseman Jake Muzzin made an ill-advised pinch along the boards and was caught out of position when the Sharks charged the other direction on a 3-on-1 break. Joe Thornton scored to cap the rush, erasing a 1-0 deficit and propelling San Jose to a 5-1 win at Staples Center.

Pivotal players: The Sharks made life difficult for Kings goaltender Jonathan Quick, screening his view and deflecting shots from the perimeter. Joe Pavelski and Tomas Hertl scored off redirected shots that Quick had no chance of stopping.

Questionable hit: The Kings’ Dustin Brown cracked the Sharks’ Logan Couture with a late hit at the blue line in the first period. Brown was not penalized on the play by TV replays from a number of angles indicated he struck Couture in the head, which could bring a call from the NHL office soon.

Between the pipes: Quick started for the Kings and his former backup, Martin Jones, was in goal for the Sharks. The Kings traded Jones to the Boston Bruins for Milan Lucic on June 26 and then the Bruins traded him to the Sharks several days later. Quick made 27 saves; Jones made 19.

Injury update: Left wing Dwight King (lower body) did not dress. He is expected to be sidelined for an extended period after he was hurt in the Kings’ exhibition finale Saturday. Muzzin and fellow defenseman Matt Greene were in the lineup after suffering upper-body injuries in exhibition games.

Up next: The Kings play host to the Arizona Coyotes on Friday at Staples Center.