Ducks winger Jakob Silfverberg scored in the shootout Friday against the St. Louis Blues, helping his team to a 4-3 victory at the Honda Center. He is 3 for 4 this season in the shootout and 17 for 27 (63 percent) in his career, the best shooting efficiency in NHL history for players with a minimum of 15 attempts.

“I’ve basically been doing the same move for a long time,” he said of aiming for the upper portion of the right side of the net. “If it’s a good enough shot, I think it’s going to beat the goalie. If you shoot it quick enough, it’s going to be there.”

Here’s what ever-quotable St. Louis Blues coach Ken Hitchcock said after the Ducks rallied for a 4-3 shootout victory Friday at the Honda Center, discounting a reporter’s notion that it was another in a series of letdowns for his team:

“This was a playoff game. This was a sudden-death playoff elimination playoff game. Both teams put in a hell of an effort. One of the grittiest efforts by our team all year. I’m sure they’ve got to be pretty proud of their effort, too. It was a hell of a hockey game.

“Both teams poured their hearts out. Both teams played as well as they could play. We ran out of bodies and they had a little more left in the tank at the end. We pushed them so hard, we almost pushed them right out of the building in the second period. And then they came back and pushed us. This was a playoff hockey game, a sudden-death playoff game.”

Here’s some of what Ducks coach Bruce Boudreau said after a 5-1 loss to the Carolina Hurricanes on Friday at the Honda Center: “We didn’t outwork them. They outworked us. They came ready to play. It’s disappointing. We’re in a position where we can’t afford to all of a sudden not be ready to play, especially when you have one game a week. You’re not going to gain any points if you don’t win. It’s disappointing all around.”

Kings winger Tyler Toffoli had this to say when asked about his biggest health concerns for 2015-16: “Try not to get mono again.” He had the teenager’s “kissing disease” and sat out six games last January. 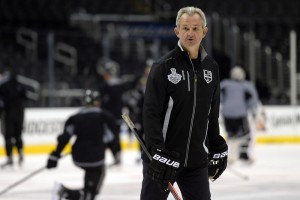 Here’s what Kings coach Darryl Sutter said after a grinding 2-1 victory Sunday over the Colorado Avalanche: “We’re happy with the win. It was a man’s game out there. It wouldn’t have been for the faint of heart, that’s for sure.”

Here’s what Ducks center Ryan Kesler said about the team’s lackluster effort during a 4-0 loss Wednesday to the Arizona Coyotes at the Honda Center: “It’s frustrating. We’re as mad as anybody. It’s not the type of effort we want. If we think we’re just going to come in on Friday and it’s magically going to happen, it’s not. We need to put our work boots on. That starts with will and passion.”

The Ducks play host to the Colorado Avalanche on Friday.

Kings coach Darryl Sutter made it clear after Tuesday’s 3-0 loss to the Vancouver Canucks dropped them to 0-3 to start the season that he wants more production from the team’s top players. The Kings have one even-strength goal in three games, plus one shorthanded marker. They are 0 for 13 on the power play.

Asked what he’s most concerned about, Sutter said, “The play of our top players.”

“The guys who are coming on to lead you in terms of offense, they didn’t have any touches in the offensive zone,” Sutter said. “A lot of that is fighting through checks and second, third effort and things like that.”

The Kings had only 15 shots on Ryan Miller’s goal. 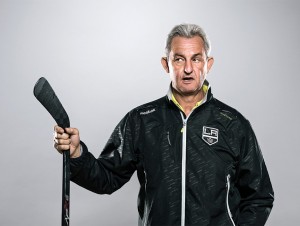 Kings goalie Jonathan Quick gave up four goals on the Arizona Coyotes’ first 10 shots during a 4-1 loss Friday at Staples Center. Quick wasn’t sharp in goal, but Kings coach Darryl Sutter was during his postgame press conference. Here’s Sutter on Quick: “He didn’t play very well tonight, did he?”