Kings goaltending prospect Patrik Bartosak waived arraignment Tuesday in a Manchester, N.H., court on domestic violence charges, according to a report on the Union Leader newspaper’s website. Bartosak, a 22-year-old from the Czech Republic who was recently re-assigned from the Kings’ AHL team in Ontario to their ECHL club in Manchester, faces a total of 12 charges, including a felony second-degree assault charge that he attempted to strangle his girlfriend Monday afternoon at a New Hampshire residence.

A hearing on the felony charge was set for Dec. 16.

A trial date for assault, threatening and stalking misdemeanors was set for Jan. 28.

The Kings are aware of the situation and said in a statement, “This is a very serious matter and these allegations represent a type of behavior we do not stand for. We will continue to gather information and comment further when appropriate.”

Slava Voynov, a former Kings defenseman, served 45 days in jail after a domestic violence conviction earlier this year. Voynov returned to his native Russia rather than face a deportation hearing. The Kings were set to terminate his contract on the day Voynov announced he would self-deport to Russia.

The NHL has not lifted its indefinite suspension of Voynov.

In addition to Voynov, two other Kings players, Mike Richards and Jarret Stoll, were arrested and charged with drug possession this year. Richards’ contract was terminated during the off-season and he faces a hearing in an Emerson, Manitoba, court Dec. 8. Stoll’s felony arrest in Las Vegas was later reduced to a misdemeanor and he signed with the New York Rangers as a free agent during the summer.

Later, he allegedly sent text messages to the woman, saying he was coming to her place of employment at the Mall of New Hampshire. He is alleged to have been waiting for her in the parking lot when she left work. 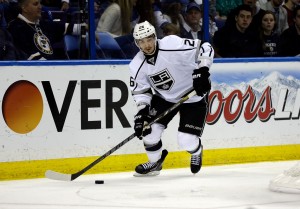 Slava Voynov signed a three-season contract Thursday with SKA St. Petersburg of the KHL, according to news reports from Russia. Voynov, a former Kings defenseman who severed ties with the team and the NHL after serving jail time last summer on a domestic violence charge, faced a deportation hearing when he returned to his native Russia voluntarily in September.

The Kings still hold the rights to Voynov and the U.S. Customs and Immigration Enforcement would have to clear him before he could return to play in the NHL. He could join Russia in the World Cup of Hockey next fall, however. The games will be played in Toronto and Voynov would not need to pass into the U.S.

He remains suspended by the NHL, which banned him indefinitely after his arrest Oct. 20, 2014. He won Stanley Cup championships with the Kings in 2012 and ’14, and the team was prepared to terminate his contract before training camp in September. Voynov then departed for Russia voluntarily.

Voynov will begin practicing with SKA on Oct. 31, according to reports. The team’s next game is Nov. 10 against Dynamo Moscow.

Slava Voynov, a former Kings defenseman who returned to his native Russia last month after serving about half of a 90-day sentence for domestic violence, is close to signing a contract in the KHL, according to a report Friday on the website R-Sport.ru.

“(Voynov has) decided to play for SKA due to the fact that the club with compete for the Gagarin Cup,” Ravil Iskhakov, Voynov’s agent, told R-Sport with the translation posted on The Hockey News’ website. “This will help Voynov prepare for matches for the national team of Russia.”

Details of the contract were not available.

Voynov could return to play in North America with Russia in the World Cup of Hockey next fall, which begins Sept. 17 in Toronto.

The NHL suspended Voynov with pay after his arrest in the early-morning hours of Oct. 20. He did not play again in 2014-15 and then suffered a torn Achilles’ tendon while playing tennis and was unable to skate. The Kings suspended him without pay for hurting himself in a non-team activity.

Voynov pleaded no contest to a misdemeanor charge of domestic violence and served about 45 days in jail in Seal Beach. Agents for U.S. Immigration and Customs Enforcement took him into custody early last month. He then returned to Russia voluntarily, avoiding a deportation hearing.

He has been in Russia since Sept. 22, according to R-Sport.

After the domestic violence arrest of Slava Voynov last October and drug busts of Jarret Stoll and Mike Richards during the off-season, the Kings on Monday announced several new training and awareness programs aimed at improving off-ice conduct.

“During the past year, we have been extremely diligent in developing an educational strategy and comprehensive programs in an effort to ensure that the troubling incidents that occurred last season are not repeated,” Dan Beckerman, chief executive of the Kings’ parent company, AEG, said in a statement. “We have conducted research, gathered information and forged partnerships that will better prepare our players and staff for challenges that could impact their behavior away from the workplace.”

The Kings announced a partnership with Peace Over Violence, a Los Angeles-based violence prevention center. In addition, the team said it hired former NHL player Brantt Myhres to a newly-created player assistance position, focusing on the challenges of addiction and substance abuse.

Chris Herren, a former NBA player who founded the Herren Project, will speak to the team about the dangers of drug and alcohol abuse. The team also will undergo sexual harassment training and complete a conduct awareness program.

“These programs are now part of the development process for all of our players,” Kings general manager Dean Lombardi said in a statement. “No longer can we solely focus on their growth and education as just hockey players. We need to give them the tools to thrive as people as well.”

Lombardi is schedule to speak further on the subject when he meets with reporters before Tuesday’s exhibition against the Arizona Coyotes at Staples Center.

Here’s what the Kings had to say:

“On July 2, Slava Voynov entered a plea of no contest to domestic violence.  Since that development, Mr. Voynov has been in the custody of the Seal Beach Detention Center and U.S. Immigration and Customs Enforcement.  During this period of detention, the Los Angeles Kings decided he would no longer play for the team. The method by which we would ensure this outcome was something we carefully considered and we established a deadline of September 17 – the beginning of our 2015-16 training camp – to reach this outcome.  Recently it became evident to us that our conclusion to this process would be to terminate Mr. Voynov’s Standard Player’s Contract.  However, Mr. Voynov’s announcement today of his intention to leave the United States and return to Russia makes the termination unnecessary.

“As we have publicly stated since Mr. Voynov’s arrest last year, the Kings organization will not tolerate domestic violence. As part of that commitment, we will soon announce a series of new Conduct Awareness Training Initiatives that reflect the values and principles central to our franchise.”

Here’s a timeline of the saga of now ex-Kings defenseman Slava Voynov:

Oct. 20, 2014: Voynov is arrested in the early-morning hours at a Torrance hospital after domestic violence incident at Redondo Beach home that began at a team party. He is later accused of a felony and ordered to stand trial on charges of punching, kicking and choking his wife, Marta Varlamova.

Oct. 20, 2014: Voynov is suspended indefinitely with pay by the NHL, pending an investigation.

Dec. 16, 2014: A police officer testifies at a preliminary hearing that Varlamova said her husband punched her in the face during an argument at a Halloween party. She also said he choked after the couple returned to their home, threw her to the floor and kicked her repeatedly.

June 24, 2015: The Kings confirm to reporters that several weeks earlier they had suspended Voynov indefinitely without pay after he tore his Achilles’ tendon while playing tennis several months earlier. The move means Voynov’s $4.116 million salary doesn’t count against the cap.

July 2, 2015: Voynov pleads no contest on a misdemeanor domestic violence charge, and a judge sentenced him to 90 days in jail, placed him on three years probation, required him to complete a 52-week domestic violence program and perform eight hours of community service plus pay fines of $700.

Sept. 2, 2015: Voynov is released after spending nearly two months in jail and taken into custody by federal immigration officials. He remained in a federal facility in the custody of the United States Immigration and Customs Enforcement pending a hearing before an immigration judge.

Sept. 16, 2015: Voynov announces through his attorney that he would begin the formal process of returning to Russia with my family. He apologized to fans and others in and around hockey and wished his former Kings teammates well.