The Ducks re-assigned goaltender Anton Khudobin to the San Diego Gulls of the American Hockey League on Wednesday, which means John Gibson is sound again after suffering an upper-body injury in Saturday’s victory over the Chicago Blackhawks. Gibson didn’t dress for the past two games, a pair of Ducks victory over the Edmonton Oilers and the Calgary Flames.

The Ducks also sent defenseman Korbinian Hozler to the Gulls on a conditioning assignment. He has played only 18 games with the Ducks this season, recording one assist. He last played in a Jan. 23 victory over the Red Wings in Detroit.

Ducks defenseman Clayton Stoner skated with his teammates Tuesday, but left practice earlier than the rest. He didn’t play in a 4-1 victory Sunday over the Winnipeg Jets because the team said he was “a little banged up.” Korbinian Holzer replaced Stoner on Sunday and could again Wednesday, when the Ducks play host to the Toronto Maple Leafs.

The Ducks could have played defenseman Shea Theodore in Sunday’s 4-1 victory over the Minnesota Wild and scratched Korbinian Holzer. Theodore, 20, could have made his NHL debut, but instead Ducks coach Bruce Boudreau played Holzer for the first time since a March 2 trade with the Toronto Maple Leafs. The Ducks then sent Theodore back to San Diego of the AHL on Monday and Holzer joined the team for its five-game trip that begins Thursday against the Nashville Predators.

“He was fine,” Boudreau said of Holzer’s play. “You’ve got to believe that a young man is a little nervous when he hasn’t played an NHL game for the team yet and he got here in March, so …. But in the third period, I thought he showed his true worth. … He’s a big, strong man. We can always use that.”

Of his thoughts on finally inserting Holzer into the lineup, Boudreau said, “If you’ve got any feelings … I mean, we’re not robots out there … I mean, I would have loved to have seen him play (last season). He came in with the best attitude. Every day, just worked hard. You want to reward guys like that. So, I was very happy that he was able to play and be a contributor.”

Asked about Theodore’s future in San Diego and also in Anaheim, Boudreau said, “Young guys need to play, and when they’re confident and they feel better, that’s when they get the call. You don’t want to thrust somebody into something he’s not ready for, because then it only goes downhill. Shea’s gotten better every year I’ve seen him, better in training camp, and he’s starting to fill into his body. I think there’s going to be a time when he’s going to be playing in this team.”

Key play: Mike Santorelli swatted a rebound of a Shawn Horcoff shot into the net to propel the Ducks to a 4-1 victory Sunday over the Minnesota Wild at the Honda Center for their first victory after a 0-3-1 start to the season. Horcoff was so excited by the goal that he almost hugged the referee by mistake. Strange days and nights to start the season for the Ducks.

Pivotal performer: Center Rickard Rakell scored the first goal of the season by a Ducks forward when he deflected defenseman Hampus Lindholm’s perimeter shot into the back of Devan Dubnyk’s net for a 2-1 lead 16:01 into the first period.

Breaking the ice: The Ducks ended a scoreless streak of 173:12 when defenseman Cam Fowler scored 10:08 into the game. Fowler celebrated as if he had won a big playoff game with his perimeter shot from near the left point.

Quote, unquote: “When things aren’t going great for your team, sometimes you just need a little confidence boost to get you going in the right direction,” Fowler said. “Credit our guys for sticking with it. We were able to sneak some by him (Dubnyk).”

Injury update: Ducks defensemen Clayton Stoner (lower body) and Simon Despres (head) didn’t play because of injuries. Korbinian Holzer made his Ducks debut in place of Despres, who was hurt by an illegal check Friday by Colorado’s Tyson Barrie. The NHL suspended Barrie for three games.

Between the pipes: Anton Khudobin started in goal for the Ducks in place of Frederik Andersen. A team spokesman said Andersen was not ill or injured. Khudobin stopped 34 of 35 shots in his first win with the Ducks in his second appearance.

Up next: The Ducks start a five-game trip Thursday at Nashville. 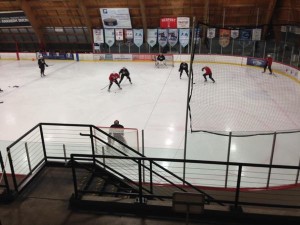 The Ducks on Saturday recalled defensemen Shea Theodore and Korbinian Holzer from their AHL team in San Diego. Theodore, a first-round draft pick in 2013 (26th overall) could make his NHL debut Sunday against the Minnesota Wild. Holzer, acquired last March 2 from the Toronto Maple Leafs, has yet to appear in a game for the Ducks. They could replace injured defensemen Clayton Stoner (lower body) and Simon Despres (head) in Sunday’s game.