The Kings sent a pick and a prospect to the Carolina Hurricanes to get veteran winger Kris Versteeg on Sunday. Versteeg is a well-traveled one, having played for the Hurricanes, Chicago Blackhawks, Florida Panthers, Philadelphia Flyers and Toronto Maple Leafs during a nine-year career. He was a member of the Blackhawks’ Stanley Cup championship teams in 2010 and ’15.

“He’s been around,” Kings center Anze Kopitar said of the 29-year-old Versteeg. “He has two (Stanley Cup wins), so obviously he knows what it takes. From playing against him, I know he’s got good kill and he’s got some edge to him too, which certainly fits with this team (the Kings).”

The Kings sent prospect Valentin Zykov and a conditional fifth-round draft pick to Carolina to get Versteeg, who had 11 goals and 33 points in 63 games this season. 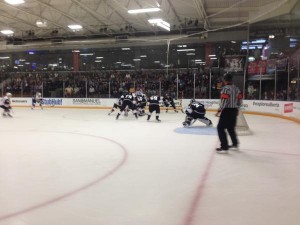 The Kings’ rookies played host to the Arizona Coyotes’ rookies Tuesday at the Toyota Sports Center in El Segundo and fell with a thud 5-3 (or 7-3 if you include the 3-on-3 overtime exhibition that was tacked onto the end of the game). The game was more than a little scrappy and it was difficult to separate the best from the rest as the Kings tried to out-muscle the Coyotes.

The teams play again Wednesday at 2 p.m., in El Segundo.