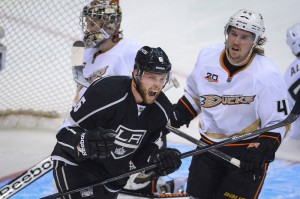 Jake Muzzin and the Kings face the Ducks on Wednesday for the first time since the playoffs last spring.

The Kings and Ducks renew their mutual dislike for each other Wednesday at the Honda Center, which actually means fans of the teams renew their mutual dislike for each other. Some of the players, gasp, are actually friends off the ice. Others are teammates on Canadian or United States Olympic teams. As rivals, the Kings and Ducks are more like cousins who bicker occasionally during get-togethers at the holidays. At least that was the opinion of Kings coach Darryl Sutter, who said Tuesday: “What was in the dictionary for rivalry 15 years ago is not rivalry now.”