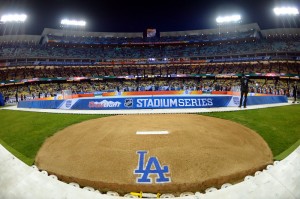 The Kings and Sharks will play outdoors in Santa Clara on Feb. 25. The Kings and Ducks played last season at Dodger Stadium.

The HBO 24/7 series leading up to various outdoor games over the years is dead. It’s been replaced by a similar venture to air on a relatively new cable outlet called EPIX. The concept is the same, with the network giving viewers a behind-the-scenes look at the Kings and the San Jose Sharks leading up to their outdoor game at Levi’s Stadium in Santa Clara on Feb. 21.

The first episode will air Feb. 3 at 7 p.m., with additional episodes airing on subsequent Tuesdays and finishing with a wrapup of the game Feb. 24.

More information is there and at NHL.com.

The Kings have gone through this one before, leading up to their game against the Ducks at Dodger Stadium last Jan. 25. Who can forget a mic’d up Drew Doughty telling the Ducks’ Patrick Maroon, “You suck at hockey”?

“I’ll be honest, there were a lot of days that I hated (Kings coach) Darryl Sutter when I played for him, but he sure got the best out of his players and he sure knows how to motivate and coach the right way as far as positioning and stuff like that. He’s an excellent coach.

“I’ll be honest, (an in-game tribute on the scoreboard) was a little bit easier. I think just actually skating out for warmups the first time and you see the signs around. It’s, like, ‘This is real. I’m not playing here anymore.'”

Kings coach Darryl Sutter had this to say after defensive-minded defensemen Matt Greene and Robyn Regehr scored second-period goals in a 5-2 victory over the Florida Panthers: “It’s good to see Robyn and Greene score. They don’t get much credit and they give you the blue collar every night. They are our two most consistent defensemen, for sure. It’s always good to see them score.”

Here are the top paragraphs of Tuesday’s game story:

The Kings welcomed former teammate Willie Mitchell back to Staples Center on Tuesday night. They gave him his Stanley Cup championship ring and saluted his short but memorable tenure with the team in a video tribute that played on the giant overhanging scoreboard.

They also gave him a reminder of how they used to seize games and make them theirs, taking a 5-2 victory from his new team, the Florida Panthers. The Kings scored four times in the pivotal second period, including two while on the power play.

Here are three things that stood out about the game:

First, the Kings power play roared to life with two goals in Saturday’s victory over the Ducks and it didn’t slow in the least Tuesday against the Panthers. That’s a good sign for a team that often struggles to score. Period. They got three power-play goals, a season high, in six chances against Florida. Let’s see if they can keep it going Thursday against the Carolina Hurricanes. A strong power play can make a good team great and a great team, well, it makes winning Stanley Cups easier.

Second, Greene and Regehr scored goals. Wait, what?  “At first I didn’t think it was ‘Greener,’” Kings center Anze Kopitar said, smiling, when asked about Greene’s first goal since Oct. 19, 2013. “I didn’t know he had that in his repertoire.” Regehr’s goal was his first since Feb. 26. So, that happened, which was a bonus for the Kings.

Third, Mitchell’s return had a surreal quality to it. He signed a two-season, $8.5-million contract with the Panthers during the offseason, but he said Tuesday that the reality of his departure really hit him during the warmup before his Staples Center return. He acknowledged that it was not a comfortable feeling. “Just actually skating out for warmups the first time and you see the signs around,” Mitchell said. “It’s, like, ‘This is real. I’m not playing here anymore.’”

For starters, Florida Panthers defenseman Willie Mitchell makes his Los Angeles return Tuesday night to face the Kings, the team he helped win Stanley Cup championships last season and in 2012. Mitchell, who signed a two-season, $8.5-million contract with the Panthers during the offseason is one of a number of players who make the Panthers more formidable than anticipated.

Second, Florida (6-4-5) has victories over the Ducks and San Jose Sharks, a pair of Western Conference elite teams, within the last week. The Panthers thumped the Ducks 6-2 on Sunday. Kings defenseman Alec Martinez is expected to be sidelined for about a week after undergoing finger surgery Friday.

Third, the Kings (9-5-4) ended a two-game losing streak with a 3-2 overtime victory Saturday over the Ducks. Tyler Toffoli leads the Kings with eight goals, and rookie Tanner Pearson has seven. Toffoli also has a team-leading 10 assists.

Here’s the link to the story from SportsNet reporter Chris Johnston in Toronto: http://www.sportsnet.ca/hockey/nhl/bettman-unsympathetic-for-cap-crunched-kings/

Here’s what Kings center Jarret Stoll said after scoring his first goal of the season, the game-winner in a 3-2 overtime victory over the Ducks: “It feels great. It’s been a while. I’m trying hard, but it feels great to get that (first) goal.”

The Kings still haven’t made a formal announcement on the surgery that was performed on defenseman Alec Martinez’s finger Friday. Most teams send out a press release revealing the news. Kings coach Darryl Sutter had this to say after Saturday’s 3-2 overtime victory over the Ducks: “Everything went well. It was basically a finger. They had to do some suturing on his finger and clean up his nail. When it heals, then he’ll be ready.”

As a result of the Kings’ injuries, defenseman Drew Doughty’s ice time has grown to an average of 28 minutes, 37 seconds per game, the second-highest in the league behind the 29:08 played per contest by Minnesota Wild defenseman Ryan Suter. Doughty averaged 25:42 last season, seventh overall.

“He’s been playing a lot of minutes,” Kings coach Darryl Sutter said after Thursday’s 2-0 loss to the Dallas Stars. “Do we like that? No, but that’s where we’re at. I look at that all the time, too. It’s too many minutes. He’s going to tell you he’s fine, but over the long haul, that’s too many.”

If it’s not one thing, it’s another for the Kings. Just when it seemed their defense crops might be back to something close to full strength again, they lost another valuable member when Alec Martinez underwent finger surgery Friday morning.

Kings general manager Dean Lombardi informed the club’s website of Martinez’s surgery, but did not provide further details. It wasn’t immediately certain how long the Stanley Cup playoffs hero would be sidelined, or precisely what was done during the procedure.

Martinez, who scored the series-winning goals in Game 7 of the Western Conference final against the Chicago Blackhawks and Game 5 of the Stanley Cup Final against the New York Rangers, was injured while blocking a shot in the second period of Thursday’s loss to the Dallas Stars.

His absence means the Kings are down to only six healthy and eligible defenseman again, with Robyn Regehr poised to return to the lineup for today’s game against the Ducks after sitting out three contests because of a lower-body injury.

Slava Voynov continues to serve an indefinite suspension imposed by the NHL after his arrest last month on domestic violence charges after an incident at his Redondo Beach home. The Kings placed him on non-roster status earlier in the week in order to sign free agent Jamie McBain.