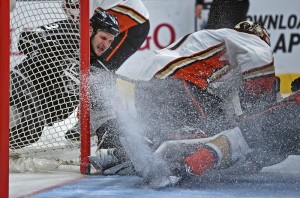 The Kings’ effort and energy, as evidenced by Kyle Clifford’s scoring chance, were improved in a 3-2 shootout loss to the Ducks. (Photo by Hans Gutknecht/Los Angeles Daily News)

The Kings were far from flawless during their 3-2 shootout loss Saturday to the NHL-leading Ducks at Staples Center, but a return to a more disciplined and well-ordered game was “a step in the right direction,” captain Dustin Brown said Sunday.

Brown called the shootout a “crap shoot,” a reference to the Kings’ 1-7 record this season in the skills contest. Kings shooters are a woeful 2 for 28 in eight shootouts, which includes misfires from Jeff Carter, Anze Kopitar and Marian Gaborik on Saturday against the Ducks’ Frederik Andersen.

Jakob Silfverberg scored the only goal in the shootout and the Ducks (30-10-6) increased their lead over the Kings (20-14-11) in the Pacific Division to 15 points. Alec Martinez and Kopitar scored in regulation for the Kings. Ryan Getzlaf and Sami Vatanen scored for the Ducks.

The bottom line in a bottom line game is that the Kings’ play was dramatically improved over recent games, including a dreary 5-3 loss Wednesday to the lackluster New Jersey Devils. The Kings were far better defensively and in goal Saturday against the Ducks.

The Kings squandered leads of 1-0 and 2-1, but they didn’t give up goals in bunches, as they did against the Devils, who scored three times in 68 seconds in the second period. The Kings played the Ducks even in special teams, with each team clicking once on the power play.

However, the Kings were outshot 31-28 by the Ducks, the first time they’ve been outshot since Nov. 29, a remarkable run that hasn’t translated into victories. The Kings have lost two in a row and are 3-3-4 in their last 10 games going into Monday night’s home contest against the Calgary Flames.

The Kings awoke Sunday in ninth place in the Western Conference, one spot behind the Flames. Only the top eight teams in each conference advance to the playoffs, and in order to defend their Stanley Cup championship, the Kings must finish in the top eight.

“We played a really good hockey game, but we didn’t close it out coming into the third period,” Gaborik said Saturday after Vatanen, a defenseman, scored a tying power-play goal in the third. “The shootout has been an issue for the whole year.

“The points are getting away from us in the shootout, so we just need to find a way to put some goals in. We’ve been practicing a bit, but we just have to get it done. We have enough talent for the guys to score goals. We just need to get the one win and the confidence level will go up.”