Actually, he said it a couple of different times to a couple of different questions after the Kings’ 4-2 loss to the Ducks on Friday at the Honda Center, but this was his response to the difference in the contest: “I think their forecheck overwhelmed us the whole night and it just caught up with us.”

Justin Williams wasn’t convinced a quick whistle that wiped out his potential second-period goal was what cost the Kings in a 1-0 loss Thursday to the Ottawa Senators. It might have made things different, but it wasn’t what turned the game in the Senators’ favor and, ultimately, ended the Kings’ eight-game winning streak.

“It could have (changed the complexion of the game),” Williams said. “But you don’t win or lose the game on one call. You win it with the body of work in the game. It wasn’t good enough. We let them hang around. You only get one pass at them.” 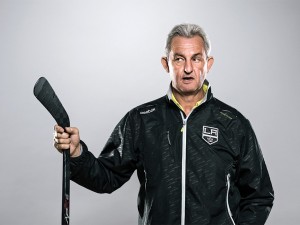 Jonathan Quick made 20 saves in the Kings’ 1-0 victory Tuesday over the Detroit Red Wings at Staples Center for his fourth shutout of the season and the 35th of his stellar career. He and the Kings won for the eighth consecutive game. His longest winning streak is nine games set in 2009-10. His goals-against average is 1.63 during his streak, and his save percentage is .940.

“It just feels like some nights you see the saves he makes and you think he isn’t going to let anyone score tonight,” Kings winger Justin Williams said of Quick’s play. “He’s been a rock throughout this win streak, and he will continue to be.”

Here’s what Kings captain Dustin Brown had to say after playing in a second Stadium Series game in as many seasons: “Two is enough for me. It’s a lot of buildup and there’s a lot that goes into it. It’s an exciting game, but I think our personality, with the group of guys in here, we’re pretty low key and this is the other end of the spectrum.”

Here’s what Kings forward Marian Gaborik said about adjusting his style of play to fit his more defensive-oriented teammates: “Yeah, I had to adjust a little bit, to buy into the system, play on the right side of the puck and make sure to play in the game and do my responsibilities as well. So, I think we’re rolling very good as a team right now, and I just have to keep it up.”

Here’s what Kings captain Dustin Brown said about Gaborik’s play: “I think we all understand what he was brought here to do, and that’s score big goals, and that’s what we expect of him. It’s the time when he’s not scoring big goals that we need him to play Kings hockey and tonight he came through for us huge. … I think it’s a work in progress.”

The Kings’ Marian Gaborik scored the winning goal in their 2-1 victory Saturday over the San Jose Sharks. It seemed to come out of nowhere, and not only because of the way he ripped his shot past the Sharks’ Antti Niemi and into the net in the opening minutes of the third period. Gabork has been something of a forgotten man this season, after leading the Kings in goals during the playoffs last spring.

“He’s pretty quiet, he’s pretty quiet, and then he has a goal like that,” Kings captain Dustin Brown said of Gaborik, who scored his 17th of the season. “That’s the type of game-breaker he is.”

Here’s Tampa Bay Lightning forward Brian Boyle talking about the play of the Kings, who defeated his team 3-2 on Saturday and by 4-2 on Feb. 7: “They are opportunistic. That’s the way it’s going to be from here on out. If you want to win in the playoffs in March and April, those teams are going to be opportunistic. It’s a lesson learned, hopefully, and we’ll figure out what we can do. Give them credit …”

Here’s more from Tampa Bay’s Tyler Johnson: “They wait for you to make those mistakes and then they capitalize on them. That’s what they did. I thought we played a pretty good game. It’s just unfortunate that the mistakes we did make, they capitalized on.”

Less than two weeks ago, the Kings got thumped 4-0 by the Capitals in Washington. The Kings then beat the Capitals fairly handily 3-1 on Saturday at Staples Center. What changed? a reporter asked Washington coach Barry Trotz.

“They did a good job,” Trotz said of the Kings. “A lot of credit goes to them. They came in, put pucks deep, hung onto them and really grinded it out. We didn’t have enough urgency in our game. They had a little more urgency throughout the game and we had too many people who weren’t as urgent as they were.

“At the end of the day, you’re not going to beat these guys like that. They know how to win and they got some timely saves ahead of our push there when we scored (in the third period) and we hit the post right away. But we didn’t have enough guys on their A game, that’s for sure.”

Carter and wingers Tanner Pearson and Tyler Toffoli ignited a 6-1-1 start to the season for the defending Stanley Cup champion Kings. Now, with Pearson sidelined by a broken leg, Dwight King has joined Carter and Toffoli, and if the Kings are a one-line team again, then so be it.

Toffoli recorded his first NHL hat trick and added an assist in the Kings’ 5-3 victory Thursday over the Calgary Flames. Carter had three assists and King had one goal and one assist in the pivotal third period, when the Kings broke open a close game.

Thursday’s game had the look and feel of a Kings contest from October, when That 70s Line ran wild. It was a short-lived hot streak for the three players with uniform numbers in the 70s, and the Kings came crashing to earth and, ultimately, out of a playoff position.

When coach Darryl Sutter shifted King onto the line with Carter and Toffoli, things began to click offensively again. Maybe it’s the uniform numbers. After all, King wears No. 74 on his jersey, joining No. 77 Carter and No. 73 Toffoli.

Whatever it is, the Kings couldn’t have won Thursday without That 70s Line.

“We’ve been trying to kind of work from our end out, the whole team,” Carter said of his line’s standout play during a three-game winning streak. “I think it’s been coming along, especially near the end of the road trip we saw it paying off for us. And again tonight.”

Toffoli, in particular, was superb against Calgary.

“He came back from his mono and had a really good couple of games and then he probably hit the wall a little bit,” Sutter said, referring to a bout of mononucleosis that sidelined Toffoli for six games last month. “Then the last three or four games, I think he and the line have carried us.”