Live coverage of the Stanley Cup parade, Monday, June 16 through L.A. and at the Staple Center.

Live updates throughout the day as the Los Angeles Kings try to win the Stanley Cup at home vs. the New York Rangers, Friday, June 13.
Game time is 5 p.m. TV: NBC.

If momentum carried from one game to the next, all playoff series would be sweeps.

That was the sentiment of Kings coach Darryl Sutter when asked Thursday if the Rangers’ 2-1 win in Wednesday’s Game 4 of the Stanley Cup Final swung the momentum of the best-of-seven series that the Kings lead three games to one.

Not a single member of the Kings organization expressed any preference about where they would rather win the Stanley Cup. The possibility of closing out the series at home in tonight’s Game 5 didn’t sound sweeter to anybody in purple and black.

“I don’t care where it is or how many games it takes, I just want to win,” center Tyler Toffoli said. “You have to be focused and ready to do whatever it takes to win a game. It doesn’t matter how loud the fans are in the end.”

Game 4 was simply a missed opportunity, according to Kings coach Darryl Sutter. If the Kings win a fourth game in the series, whether it’s in Staples Center or Madison Square Garden is not important.

“No, it’s not,” Kings right wing Justin Williams said. “Just win. That’s with a big period and an exclamation point after it. Just win. I don’t care where it is. Win one more.”

The Kings were on an airplane for five hours and 22 minutes after Game 4 by coach Darryl Sutter’s count, arriving in Los Angeles at exactly 3 a.m. Thursday morning.

The Kings coach gave his players the option to practice Thursday afternoon or Friday morning before Game 5. The consensus was that the Kings much preferred to return home and sleep in their own beds. Even the plane ride had it’s perks.

“I had a good Chilean Seabass,” Kings center Jarett Stoll said. “It was great, actually. Got a good three hours of sleep.”

The Rangers remained in New York Wednesday night and flew to Los Angeles on Thursday.

When Colin Fraser looked around at the huge media contingent in the small Kings locker room for the morning skate Wednesday at Madison Square Garden, he said: “This is the most media we’ve ever had.”
Hard to imagine but throw in national writers and a large media throng from New York and a Game 4 of the Stanley Cup Final in which the Kings could be celebrating on the ice, and you’ve got a ton of interest.

Dwight King talked about his goal in Game 2, in which it looked like he should’ve been called for goaltender interference. He saw the replay once in the locker room and hasn’t watched it since.
“Once the goal stood we moved on from that game,” King said. “Obviously with the playoffs, it’s a pretty rapid schedule. You do try to move on and focus on the next one.”
That was difficult as the Rangers were talking about it seemingly for two days and weren’t happy about the no-call there. Asked if he thought there was goaltender interference after the game, Alain Vigneault said: “Ask the NHL.”
King wasn’t worried about the noise. “Nothing is going to come over it,” King said. “Nothing to stress over or think about it. The call was made. Once it stands, it stands. There’s nothing to talk about.”

Live updates from Game 4 of the Stanley Cup Final – from Jill Painter and Elliott Teaford, updates from watching parties in L.A. and from the Kings and Rangers official accounts. 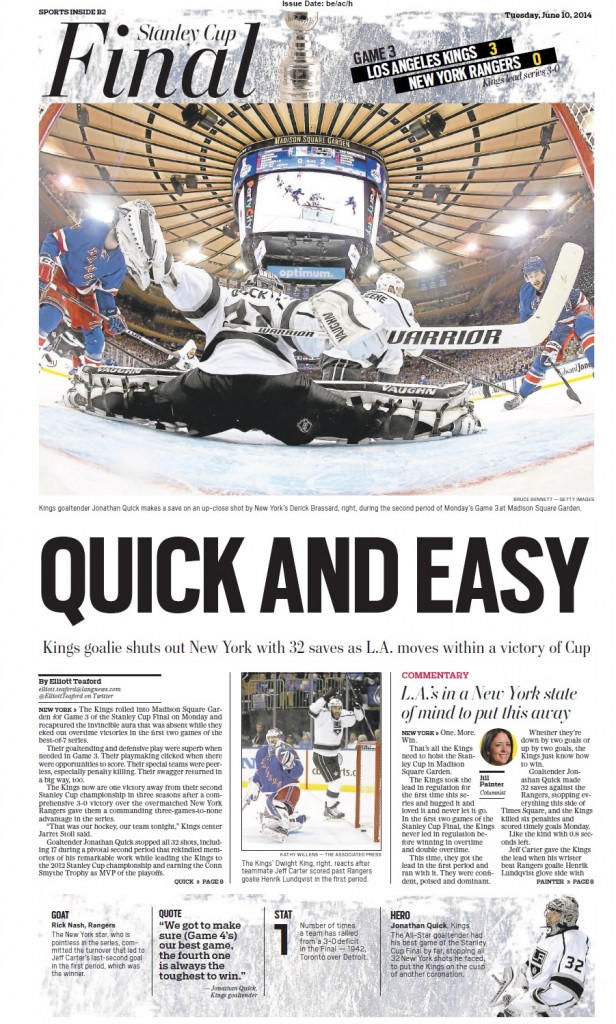