1. Who will fill the Kings’ many vacancies on defense?

Drew Doughty won the Norris Trophy last season as the NHL’s top defenseman, an honor many believed was a season or two or more late in coming to him. Jake Muzzin took strides last season toward becoming an elite defenseman. Rob Scuderi was acquired in order to provide depth and veteran leadership while Matt Greene was sidelined by an injury. If there’s one question about the Kings that looms above all the others going into training, it the one about their second and third pairs. As in, who is going to fill those slots? Alec Martinez is a serviceable No. 3 or 4 defenseman, as are Scuderi and Greene. Who are the No. 5 and 6 defensemen on the Kings’ depth chart? The Kings signed veteran Tom Gilbert from the Montreal Canadiens and Zach Trotman from the Boston Bruins during the off-season.

Kings coach Darryl Sutter called out Jake Muzzin after Thursday’s 4-3 loss to the New York Rangers, saying after the defenseman played a season-low 17 minutes, 26 seconds, including a scant 3:31 in the third period, “He refused to check. You don’t get played for what you did last year or last week or somewhere else. It’s how you’re playing tonight.”

Muzzin didn’t wish to address Sutter’s concerns after Friday’s practice, but he did say, “They had some speed out wide, but I thought we did a good job of keeping them outside. We need to do a better job of taking the body on the rush. We’re giving up too many Grade A scoring chances. Too many shots from the middle of the ice. We’ve got to get early position on them. We can’t let them get there. That starts from winning a puck in the corner and beating them back to the front of the net and getting position on guys coming from the corner to the front of the net.”

The Kings’ defense corps took another hit Friday morning, when general manager Dean Lombardi said veteran Robyn Regehr would be sidelined for between two and three weeks because of a hand injury suffered during a 6-4 victory Thursday over the St. Louis Blues.

The Kings placed Regehr on injured reserve and recalled defenseman Jeff Schultz from their American Hockey League team in Manchester, N.H. The 34-year-old Regehr was injured while blocking a shot midway through the game against the Blues.

“That’s the way she goes sometimes,” defenseman Jake Muzzin said of the defending Stanley Cup champion Kings’ lack of good fortune to start their title defense. “When one guy goes down, other guys need to step up. That’s what we’re going to have to do to keep winning.”

The Kings’ scoring struggles are nothing new. They had one goal in two games plus one period before taking the ice to start the second Thursday in Ottawa. Then erupted for three in the final period, breaking a 2-2 tie with the Senators and holding on for a 5-3 victory. The Kings improved to 12-2-1 in their last 15 games with Ottawa, dating to Jan. 16, 2001. They also have won four in a row over the Sens.

Drew Doughty had two assists for his third multi-point game of the season.

(Thanks to the NHL’s crack stat crew for the facts and figures).

Here are the top paragraphs of Tuesday’s game story:

The Kings welcomed former teammate Willie Mitchell back to Staples Center on Tuesday night. They gave him his Stanley Cup championship ring and saluted his short but memorable tenure with the team in a video tribute that played on the giant overhanging scoreboard.

They also gave him a reminder of how they used to seize games and make them theirs, taking a 5-2 victory from his new team, the Florida Panthers. The Kings scored four times in the pivotal second period, including two while on the power play.

Here are three things that stood out about the game:

First, the Kings power play roared to life with two goals in Saturday’s victory over the Ducks and it didn’t slow in the least Tuesday against the Panthers. That’s a good sign for a team that often struggles to score. Period. They got three power-play goals, a season high, in six chances against Florida. Let’s see if they can keep it going Thursday against the Carolina Hurricanes. A strong power play can make a good team great and a great team, well, it makes winning Stanley Cups easier.

Second, Greene and Regehr scored goals. Wait, what?  “At first I didn’t think it was ‘Greener,’” Kings center Anze Kopitar said, smiling, when asked about Greene’s first goal since Oct. 19, 2013. “I didn’t know he had that in his repertoire.” Regehr’s goal was his first since Feb. 26. So, that happened, which was a bonus for the Kings.

Third, Mitchell’s return had a surreal quality to it. He signed a two-season, $8.5-million contract with the Panthers during the offseason, but he said Tuesday that the reality of his departure really hit him during the warmup before his Staples Center return. He acknowledged that it was not a comfortable feeling. “Just actually skating out for warmups the first time and you see the signs around,” Mitchell said. “It’s, like, ‘This is real. I’m not playing here anymore.’”

Here are the first few paragraphs of Saturday night’s recap:

Marian Gaborik scored his long-awaited, much-anticipated first goal of the season a little less than 10 minutes into the Kings’ 5-1 victory Saturday over the Vancouver Canucks. Then Jake Muzzin scored his first about five minutes later. Then Anze Kopitar scored his third about four minutes later.

In the end, the lifeless Canucks were a cure for what ailed the shorthanded Kings.

Robyn Regehr couldn’t play because of an injury suffered in Friday’s practice. Slava Voynov was banned for the ninth consecutive game, serving an indefinite suspension imposed by the NHL after his arrest on domestic violence charges last month in Redondo Beach.

Since salary-cap issues made it impossible for the Kings to seek replacements for Regehr and Voynov from their American Hockey League team in Manchester, N.H., they were forced to dress only five defensemen for Saturday’s Pacific Division showdown with the Canucks.

Here are three additional things that stood out:

First, Gaborik’s goal was the first hint of his presence this season. Is that too harsh? Well, he was the Kings’ leading goal-scorer with 14 during their charge to the Stanley Cup championship last spring. He was the key piece to their postseason offensive surge, too. He has been injured for all but seven of their 15 games after signing a mammoth seven-year, $34-million contract to stay in Los Angeles. All things to consider when assessing his lack of production to start this season.

Second, Drew Doughty’s minutes have increased because of the Kings’ lack of healthy and eligible bodies in their defense corps. He played 29:46 Saturday against the Canucks. That’s a ton, especially this early in the season.

Third, the Canucks were surprising pushovers in their first visit to Staples Center this season. They didn’t score only Chris Higgins ended Jonathan Quick’s shutout bid with a goal at 12:07 of the final period. The Kings built a five-goal lead before Higgins struck on a centering pass from former L.A. forward Linden Vey. In the end, it was a disappointing showing by the surprising Canucks (10-5-0). 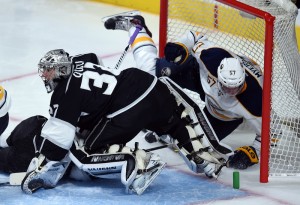 Muzzin’s return and the suspension of Slava Voynov caused a shuffle Thursday in the pairs Kings coach Darryl Sutter used to start the season. Brayden McNabb skated with Doughty in the first six games, but he was with Matt Greene. Alec Martinez and Robyn Regehr also formed a pair.

Jake Muzzin was cleared Wednesday to play in Thursday’s game against the Buffalo Sabres at Staples Center, giving the Kings the full complement of six defensemen. Muzzin was sidelined by an upper-body injury suffered during the final week of training camp and sat out the team’s first six games.

“Excited for (tonight),” Muzzin said. “You’ve got to deal with it the proper way. It could have been a lot worse if we didn’t deal if we rushed it. We’ve got a lot of season left and I’m looking forward to it. … It didn’t affect my skating or anything like that. … It’s not 100 percent, but it’s good to go.”