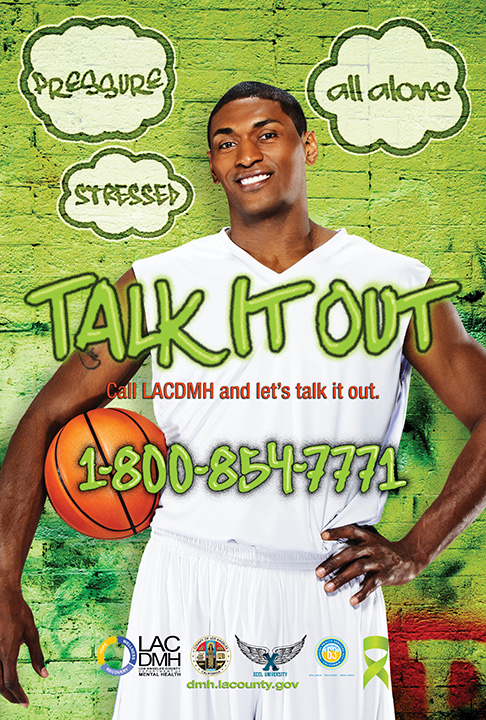 After receiving what his publicist described as “really positive feedback,” Lakers forward Metta World Peace and the Los Angeles County Department of Health will extend their campaign through June that involved various posters and billboards featuring World Peace’s likeness throughout Los Angeles.

With the help of the Metropolitan Transportation Authority, the World Peace billboards, bulletins and posters appeared at the beginning of May at MTA shelters, depots, buses and trainers with a message called “Talk it out” with versions in both English and Spanish. The signs will also have contact information for LACDMH’s 24/7 phone line (1-800-854-7771).

World Peace founded Xcel University, Inc. in 2007, which delivers funds to mental health charities. He’s extensively increased his involvement ever since joining the Lakers in 2009. He raised $651,006 by raffling off his 2010 NBA championship ring and earning the NBA’s J. Walter Kennedy Citizenship Award in 2011. World Peace has testified numerous times before Congress on behalf of the Mental Health in Schools Act, which would raise $200 million in grant funding to 200 schools. Last year, World Peace also earned recognition at the Voice Awards on behalf of the Substance Abuse and Mental Health Services Administration.