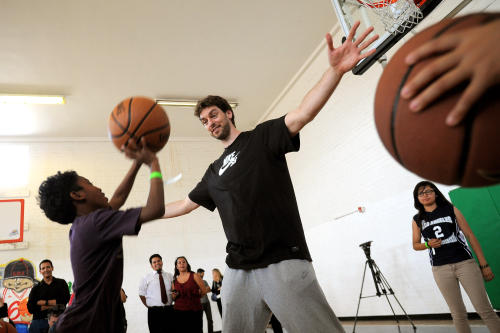 Pau Gasol of the Los Angeles Lakers plays basketball with youngsters at the Los Angeles Boys & Girls Club June 3, 2013. Gasol hosted a pep rally at the facility to encourage kids to spend their summer engaging in healthy activities.(Andy Holzman/Staff Photographer)

The moment he stepped onto the court, it appeared Pau Gasol immediately felt right at home.

Randy Newman’s “I love L.A.” blared over the loudspeakers. Fans shouted his name. And three weeks after having a procedure on both of his knees, Gasol moved fluidly.

Gasol wasn’t wearing a Lakers uniform, though he adamantly hopes he continues to do so next season. Instead, Gasol was hosting at the Boys and Girls Club in downtown Los Angeles to mark the beginning of his self-named foundation.

As part of his initiative to promote a healthy lifestyle, Gasol and his brother, Marc, of the Memphis Grizzlies will coach two different teams in what’s called “The Healthy Competition 2013” running from June 10 through Aug. 2. Using gifted Nike Fuelbands (retailed at $149) to track the teams’ progress, either Pau or Marc will have to shave their beard if their respective team loses.

“It’s something me and Marc wanted to do for a while,” Pau said. “We were looking for a way to use our abilities off the court to do good for the community and we feel this was the best way for us to give back. It’s a good way for us to help kids around the world.”

Soon, Gasol plans to extend his foundation to his native Spain, where he will leave this week for the rest of the offseason. From there, Gasol plans to tweet out and email to participants directly on ways they can maintain a healthy lifestyle through dieting and exercise in hopes he doesn’t have to shave his beard. After all, Gasol told the participants, “I’ve had this bear for the last eight years.”

On Monday, Pau’s team attempted to get off to a fast start. They participated in basketball drills, while Gasol playfully defended them. Most of the time, Gasol allowed the children to shoot over them. Occasionally, he’d playfully block a shot. Gasol couldn’t help but muse about his activity four days after getting off crutches following a procedure three weeks ago to treat the tendonosis in both of his knees.

“I’m feeling better. I was jumping around all over the place,” joked Gasol, who will likely rest for three more weeks and receive constant icing and electronic stimulation before swimming.

Just like his rehab process, Gasol’s trying to stay patient in phasing in his foundation’s initiatives. After all, this took a three-year process to complete. He wants to ensure the first event goes smoothly too.

“We’re looking at this as kind of a soft launch before we really get into expanding things around the world,” Gasol said. “We want to be able to make a difference everywhere.”

Gasol has made a big difference in other civic projects too.

He frequently visits Children’s Hospital Los Angeles, where he’s viewed spinal surgeries, talked with patients and tapped into his interest as a former medical student at the University of Barcelona. As a UNICEF ambassador since 2003, Gasol has visited South Africa (2005), Angola (2007), Ethiopia (2010) and Chad (2012) for various relief efforts. And it’s possible he will go on another UNICEF trip this summer.

“That’s something very important to us – giving back to the community no matter what we’re doing or where we’re playing,” Gasol said. “It’s something we hope the foundation will be very successful at help kids lead healthier lives.”

Pau Gasol wants Dwight Howard to return, but won’t try to convince him to stay