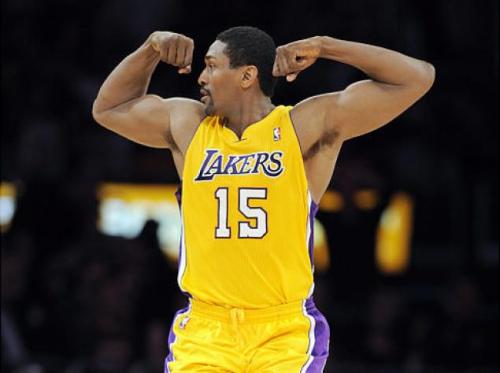 With one stroke of the pen, Metta World Peace plans to express his hope to remain with the Lakers by exercising his $7.7 million to stay for the 2013-14 season, according to a source familiar with his thought process.

“I’d be shocked if he doesn’t,” the source said.

World Peace hasn’t officially said anything regarding his decision that had to be made by Tuesday. He suggested he would make an announcement Tuesday at 9 a.m. PSTon his website. Instead, World Peace plugged a reality show he and former NFL wide receiver Terrell Owens will apparently film.

Why did so many people think I was opting? Was I that suspenseful? I must be a great actor! No a flopper, but a great twactor!!

It remains to be seen if World Peace will stay with the Lakers next season, though, since they could waive him via the one-time amnesty provision at some point between July 10-16. Should they do that, the Lakers would still owe World Peace his full salary. But the move wouldn’t count against the Lakers’ payroll and it would save them about $30 million in luxury taxes. World Peace had considered opting out of his contract in hopes of securing a longer-term deal with the Lakers even at a reduced price tag, according to a source. But with their hopes to maximize financial flexibility to pursue high-priced free agents in the 2014 offseason, the Lakers could’ve let World Peace walk. The source said World Peace understood exercising his player option carries less risk.

Should the Lakers use the amnesty provision on World Peace, it would essentially be a cost-cutting measure. The Lakers would still only be able to acquire players through their mini mid-level exception worth $3.2 million or through the veteran’s minimum worth $1 million. It also wouldn’t get the Lakers under the luxury tax threshold, unless that move coincides with Dwight Howard’s departure. If Howard and World Peace return, the Lakers’ payroll would jump from $68.1 million to closer to $100 million. This year’s tax threshold would likely be set at $71.5 million.

The Lakers could also use the amnesty provision anytime from July 10 to July 16 on Kobe Bryant ($30.5 million), Pau Gasol ($19 million) or Steve Blake ($4 million). But each scenario seems more unlikely than waiving World Peace. The Lakers would suffer a public relations nightmare if they waived Bryant for obvious reasons. They also expect Bryant to return from a torn left Achilles tendon between October and January. Even if Howard stays, it would be hard for the Lakers to overcome Gasol’s absence without a trade in place. And with the uncertainty surrounding Steve Nash’s health, the Lakers would need to lean on Blake for solid backup point guard support.

He averaged 12.8 points on 40.5 percent shooting last season, his highest scoring output with the Lakers in four years. He also appeared in better shape than in recent seasons. World Peace, 33, doesn’t have the same strength and quickness that made him one of the NBA’s best defenders during his prime years. But waiving World Peace would leave the Lakers with a serious hole to fill defensively, an area the team already lacked consistency in for most of last season.

The former Ron Artest arrived to the Lakers from the Houston Rockets roughly around the same time Trevor Ariza left the Lakers for Houston. The Lakers immediately banked on their five-year, $33 million investment, most notably because of Artest’s strong defense and Game 7 heroics of the 2010 NBA Finals against Boston where he posted 20 points on seven-of-18 shooting and five steals. World Peace then provided a memorable post-game press conference that included publicly thanking his psychologist. That helped open doors for World Peace to help mental health charities, including raffling off his 2010 championship ring.

World Peace’s time with the Lakers has also proven inconsistent. He often struggled with Phil Jackson’s triangle offense in his first two years with the Lakers. World Peace reported to training camp out of shape during Mike Brown’s first season with the Lakers. The Lakers forward is also prone to attempt ill-advised three-pointers. And he earned a seven-game suspension last season for elbowing former Thunder forward James Harden in the head, and causing him to suffer a concussion.

But the Lakers have mostly found World Peace to be endearing. He remains goofy and friendly to teammates and reporters alike. World Peace also is considered one of the hardest workers on the team outside of Bryant. And he’s provided enough secondary scoring and lockdown defense to remain valuable.

Within the next month, World Peace will find out whether that value will translate staying on the Lakers’ roster.