In what could reveal the measure of progress surrounding his right hamstring, Lakers guard Steve Nash plans to tryout for the Inter Milan soccer team Tuesday in New Jersey just before it opens play in the Guinness International Champions Cup tournament.

“It’s a dream come true to get a chance to try out, not just to try out but to take the field with Inter Milan, one of the great, storied franchises in professional sports,” Nash said in an interview with The Associated Press. “I feel like a little kid.”

END_OF_DOCUMENT_TOKEN_TO_BE_REPLACED

After failing to field any NBA offers that entailed guaranteed deals, Andrew Goudelock has accepted a one-year deal to play with the Russian basketball team BC UNICS Kazan.

The offer is worth “considerably more” than Goudelock would’ve made with an NBA minimum salary worth around $1 million, according to a source familiar with the details. But exact terms weren’t immediately provided.

The Lakers declined to grant Goudelock a $1.1 million qualifying offer, which would’ve made him a restricted free agent and enabled the Lakers to match any offer sheet he fielded. Although the Lakers invited him to play on their summer league roster, Goudelock joined the Chicago Bulls out of belief he’d have a better opportunity to showcase his skillset. He finished as Las Vegas Summer League’s fourth leading scorer, averaging 19 points on 47.1 percent shooting and 52.2 percent from three-point range in 28.5 minutes a game.

Goudelock will report to the team in Aug. 20 in anticipation of the regular season beginning in mid October.

Unics signed a one year deal with Andrew Goudelock (24 yo, 191cm). Last season he played in @Lakers and @rgvvipers, NBA @nbadleague MVP 2013

END_OF_DOCUMENT_TOKEN_TO_BE_REPLACED

Those wanting to meet Kobe Bryant no longer have to make expensive purchases to Lakers games or his basketball camp. Nor will they have to wait outside the Lakers’ facility in El Segundo or at Staples Center.

Instead, Laker fans can purchase tickets for as low as $3 here for a chance to meet with Bryant personally on Aug. 15 for his sit-down interview titled “Kobe Up Close” with Jimmy Kimmel at Nokia Theatre L.A. Live in downtown Los Angeles.

“I’ll give you guys the opportunity to have front-row seating, hanging backstage and play a game of Pop a Shot or a video game. I haven’t decided. I don’t want to give you ample time to prepare,” Bryant said in the video above. “You know how I am.”

The proceeds will go toward Bryant’s self-named foundation, which helps eradicate homelessness.

Carmelo Anthony on joining Lakers in 2014: “I doubt it”

For a team that’s suddenly banking on their championship hopes on next offseason, the Lakers’ prospects aren’t looking good.

It came in the form of TMZ approaching the Knicks’ star recently outside of a Hollywood restaurant.

“I know the upcoming season is coming up — can you see yourself in a purple and gold outfit?” the TMZ reporter asked.

Melo then coyly revealed he owns a pair of purple and gold Michael Jordan shoes.

“I’m reading between the lines, dude,” the TMZ reporter said. “I think I’m going to see you in one soon.”

Yeah, that’s really going to stop people from doing that.

The Lakers aren’t predicting it. But with the old players who may not be healthy (Kobe Bryant, Pau Gasol, Steve Nash) and significant departures (Dwight Howard, Metta World Peace), few doubt the arrival of Chris Kaman, Nick Young, Wesley Johnson or Jordan Farmar will suddenly bring the Lakers a 17th NBA championship. Yet, the Lakers have recently talked about their plans to maintain “financial flexibility” so they could go after a pair of high-priced free agents.

Anthony could be one of them should he exercise his early termination option with the Knicks. But Anthony might just do that to receive another maximum, five-year contract with New York rather than teaming up with a former coach he once butted heads with (Mike D’Antoni) and a good friend (Bryant).

Still, plenty of time exists between now and the 2014 offseason. That gives the Lakers time to prove they could best help Anthony to an NBA title, time for Bryant to convince his close pal to partner up and time for everyone else to speculate.

After all, it’s already started.

The man’s commitment level appeared as wobbly as his broken down knees. But that didn’t stop Andrew Bynum from leveling one indirect dig at Lakers fans.

Bynum’s set to play for the Cleveland Cavaliers this season, and his enthusiasm apparently goes beyond inking a two-year, $24 million deal after missing all of last year with the Philadelphia 76ers because of persisting knee issues.

“I haven’t had an opportunity to play for a city that really stands up and really supports the team,” Bynum told Fox Sports Cleveland. “I’m super excited and I can’t wait to see what it’s like.”
END_OF_DOCUMENT_TOKEN_TO_BE_REPLACED

The Lakers won’t just miss Metta World Peace for his defense and his locker room loyalty.

Reporters will miss his goofy interviews. Fans will miss his unpredictable on-court antics, ranging from flexing his biceps or kissing the hands of female Lakers fans. Some will even miss the comic relief surrounding World Peace’s zany shot selection and ugly fast breaks, even if it did cause their blood pressure to rise.

World Peace may have since signed with the New York Knicks to a two-year deal worth $3.2 million. But he’s gone back to Los Angeles providing more examples of his fun personality. The video above shows him playing a game of cornhole on the set of the Hallmark Channel’s “Home & Family,” which airs 10:00 am ET/PT every weekday. He hosted a party Monday night at Infusion Lounge in Universal City. World Peace also signed copies of his recently released children’s book Tuesday at the Grove.

As for World Peace’s cornhole appearance, he showed the same kind of marksmanship that often plagued him with the Lakers. But no matter. That didn’t prevent him from having a good time and smiling along the way.

Kobe Bryant memorabilia sells for over $400,000 in New Jersey Auction 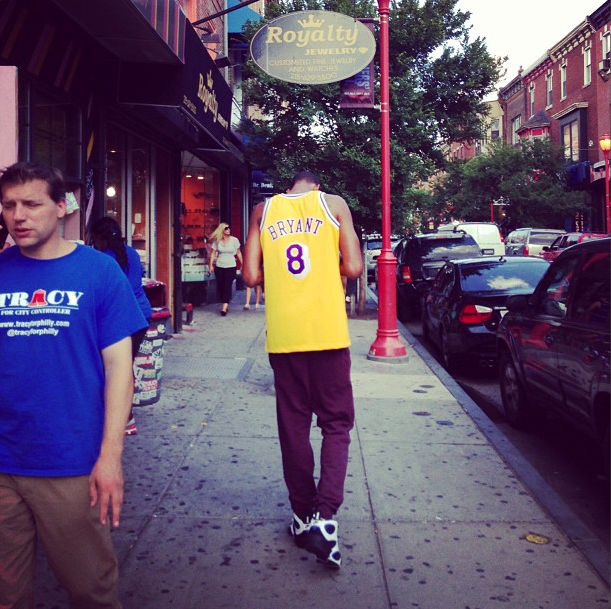 His negotiations soured his future with the Lakers, but Trevor Ariza’s sentiments toward his former team still seems sentimental.

It’s also clear that Ariza maintains a long-affection for Kobe Bryant. He even wore his No. 8 Lakers jersey as he walked through Philadelphia and posted a picture of it on his Instagram account.

Even if he insists otherwise, Dwight Howard’s departure to the Houston Rockets partly reflected his philosophical and personality differences with Bryant. It also remains to be seen whether Bryant’s plan to play beyond his $30.5 million contract next season could entice LeBron James or Carmelo Anthony to join the Lakers via free agency or scare them away.

But it seems clear there’s a number of current and former role players on the Lakers that still has affection for Bryant. Nick Young and Wesley Johnson grew up idolizing Bryant. Ariza has also largely credited Bryant sharing his shooting routine for having a breakout season in the 2008-09 campaign that led to an NBA championship.

The storyline seems all too perfect.

An L.A. native returns back home so he can play for the Lakers. He gushes about playing along his childhood hero, Kobe Bryant. The player enthusiastically dons the purple and gold uniform even if it means playing at a low salary.

Yes, all those elements emerged when former USC and Cleveland High of Reseda standout Nick Young left the Philadelphia 76ers and signed a two-year, $2.3-million deal with a player option in his second season to play with the Lakers. But it doesn’t tell the complete story.

Young and the Lakers expressed mutual interest last season, too. But those talks never materialized into anything.

“They had Dwight [Howard], [Steve] Nash and Antawn Jamison,” Young said in an interview with this newspaper recently after playing in the Drew League at King-Drew Magnet High School in downtown Los Angeles. “I didn’t want to just be another guy on the bench. I felt like I wouldn’t have been a good fit.”
END_OF_DOCUMENT_TOKEN_TO_BE_REPLACED

We present to you “Exhibit A” on why the Lakers’ well-intentioned plans to clear up cap space for the 2014 offseason won’t automatically restore the Lakers’ championship fortunes.

Indiana forward Paul George basically confirmed he won’t be among one of those attractive free agents the Lakers wish they could sign next season. Instead, it appears George and the Pacers are going to ink a max extension well before the Oct. 31 deadline for players from the 2010 draft class.

“I’m happy, man. I’m happy in Indiana,” George told ESPN.com. “It’s overwhelming (to hear) that they would want a player like me to come play for their team. But right now I’m focused on Indiana. I’m happy to be in Indiana. Our future is bright in Indiana. I wouldn’t want to leave something great.”
END_OF_DOCUMENT_TOKEN_TO_BE_REPLACED

He grew up cheering for the Lakers, but Klay Thompson has fallen in love with the Warriors.

His father, Mychal, openly hoped for Klay to wear purple and gold and follow the path he set foot during the Lakers’ Showtime Era. But Klay seems fine with charting his own path.

So when the Warriors spent last month pursuing Dwight Howard, Thompson tried to stay even keel over any scenario. Because Golden State remained over the cap, they likely could only land Howard via a sign-and-trade. And considering the Lakers maintained they’d rather let Howard walk than perform a sign-and-trade, plenty believed Thompson could become the key ingredient in convincing the Lakers to think otherwise.

“If it happened, it happened,” Thompson said this past weekend at the Drew League. “That’s nothing you can control. I’m happy where I’m at.”
END_OF_DOCUMENT_TOKEN_TO_BE_REPLACED