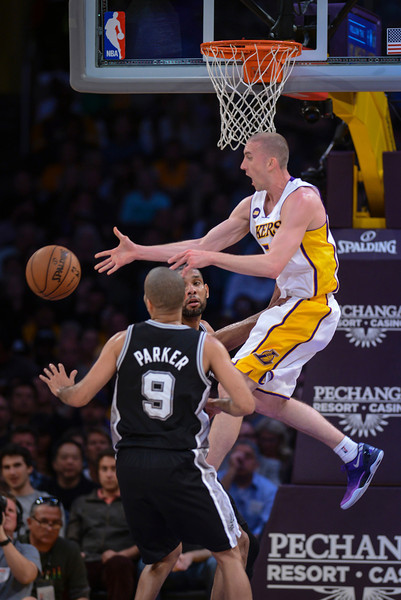 Below is the sixth in a series previewing the storylines surrounding each player on the Lakers’ roster for the 2013-14 season. This post focuses on Lakers backup point guard Steve Blake.

1. How healthy can Steve Blake stay? If this question seems to be repetitive regarding all the Lakers players, well it is. But it’s one that’s unavoidable. For Blake, he’s fully recovered from a right hamstring injury that sidelined him for Lakers’ Game 3 and 4 losses to the San Antonio Spurs in the first round of the playoffs. But there’s weird pattern that’s developed in Blake’s three seasons with the Lakers where he just can’t stay healthy. Here’s the rundown: misses three games because of chicken pox at the end of the 2010-11 season; sits out for 13 games in the 2011-12 season because of fractured cartilage that connects the rib to the sternum; stays sidelined for 37 games because of a lower abdominal strain that required surgery overlapping with a groin injury.

These are all freakish injuries and the source of them all prove hard to trace. But it’s still fair to wonder why these weird incidents keep happening. To Blake’s credit, he’s maintained a positive and resilient attitude and hasn’t let these incidents affect his work ethic and aggressiveness on the court.

2. Blake should continue to thrive under Mike D’Antoni’s system. Once Blake finally became healthy last season, he fit everything D’Antoni envisioned under his offense. Blake displayed his love for having the ball in his hands by running a good mix of pick-and-rolls and post-ups at his discretion. This freedom sparked Blake’s aggressiveness, willingness to take open shots and create on his own, three traits admittedly struggled with during his first two seasons with the Lakers for reasons including Phil Jackson’s triangle offense and adapting to Kobe Bryant’s demand for the ball. When Blake played with the second unit, he helped push the pace, ensure great floor spacing and connect with Antawn Jamison and Jodie Meeks at opportune times.

Assuming he stays healthy, expect Blake to continue where he left off. D’Antoni’s system didn’t work well for Dwight Howard or Pau Gasol, but the offense worked perfectly for Blake because it fit his preferred style of play and gave him the confidence to play without any inhibitions.

3. How will the backup spot between Blake and Jordan Farmar shake out? Even Blake expected to have a significant role this season, it’s possible that his minutes will scale back. That’s because the Lakers acquired Jordan Farmar, who boasts more athleticism and defense than Blake. That makes it possible that Blake and Farmar could wind up competing for minutes.

This isn’t a bad thing considering both Blake and Farmar are team guys. It’s actually the preferred alternative since it’s imperative the Lakers monitor Steve Nash’s playing time and they may play without Bryant as he rehabs his torn left Achilles tendon. But it will also require Blake to be flexible in playing both off-the ball and with the ball. He showed more comfort level last season playing alongside Nash and becoming a scorer, but that will have to extend toward other lineup combinations as well.

4. Blake will be needed on defense He’s not considered an elite defender, but Blake proves to be a sure upgrade over Nash. Blake will also have to enhance this skill since Farmar comes from the Turkish Basketball League largely improving on this area of his game. Either way, Blake has the tenacity, smarts and discipline at least to man this position.

No one, including Blake, will stop Derrick Rose, Russell Westbrook or Tony Parker. But consider Blake’s Game 1 effort in the Lakers’ loss to San Antonio where Parker scored 18 points albeit on 8-of-21 shooting. Blake constantly made Parker work, scrapped for loose balls and often forced him to pick up his dribble. Those qualities will at least shave off the Lakers allowing points on a few possessions each game.

5. Blake should remain a positive locker room presence. He may shy away from the Lakers spotlight. But Blake’s well liked on the team because he’s relentless on the court and deferential to others. In a season where they may face some level of rebuilding, the Lakers can never have enough of those role players to ensure frustration over on-court struggles doesn’t carry over elsewhere.