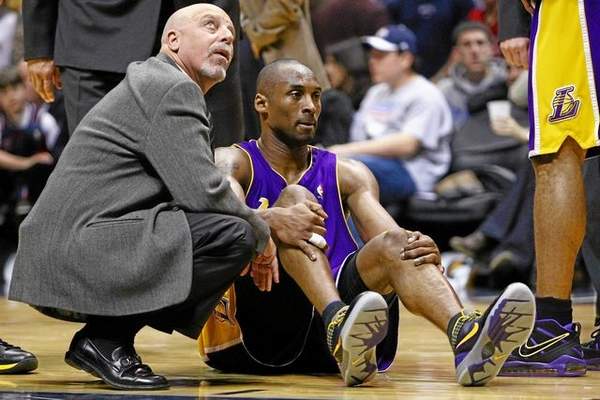 Longtime trainer Gary Vitti, seen treating an injured Kobe Bryant in 2009 at the Izod Center in East Rutherford, New Jersey, said the Lakers superstar “is doing well and has had no setbacks” while recovering from his torn left Achilles tendon. Photo by Chris McGrath/Getty Images

A walk into the Lakers’ training room on Thursday morning showed a picture that’s became all too common this offseason, but one that’s nonetheless visually appealing for Lakers fans.

Kobe Bryant continued rehabbing on his surgically repaired left Achilles tendon, the latest involving running at 75 percent of his body weight on a treadmill. Lakers athletic trainer Gary Vitti expects Bryant remains a “few weeks away” before advancing to full-weight bearing running, though he added “there’s no projected date” on whether Bryant could play in the Lakers’ season opener Oct. 29 against the Clippers.

It all fits the Lakers’ conservative approach in ensuring Bryant doesn’t return from an injury he suffered April 12 before it fully heals.

“He’s doing well and has had no setbacks,” Vitti said Thursday at his trainer’s office at the Lakers’ practice facility in El Segundo in a wide-ranging interview with this newspaper. “He’ll be ready when he’s ready. Nobody has a crystal ball on this thing.”

Bryant must first complete full-weight bearing running drills before advancing to on-court basketball activities. Vitti offered no timetable on how long it would take for Bryant to complete each stage, let alone whether he will appear in the Lakers’ season opener Oct. 29 against the Clippers. It’s safe to pencil Bryant out of the beginning of Lakers’ training camp, beginning Sept. 28, though it’s not clear if he could play in at least the tail end of the Lakers’ eight-game preseason schedule that ends on Oct. 25.

The Lakers training staff, led by Vitti, physical therapist Judy Seto and strength and conditioning coach Tim DiFrancesco, has concentrated on ensuring Bryant’s tendon heals while also building strength in his legs, knee, back and core.

“He doesn’t have injuries in the rest of his body,” Vitti said of Bryant. “When a guy has been out for a long time, that neuromuscular system shuts down and the nerves don’t fire the muscles in the right pattern in the right way. We have to get this whole thing working again. Think of him as a Ferrari. He’s a machine. If those pistons aren’t firing in the right position and in the right pattern, the timing is off. Other structures can be taking loads that aren’t built for that. The rehab is not directly solely to the Achilles tendon.”

Bryant has routinely posted rehab updates on his Facebook and Twitter accounts. He even suggested last month that he “shattered” the typical timetable it takes to recover from an Achilles tendon. The Lakers initially estimated it would take at least six to nine months for him to recover.

“He’s had a good surgery, good rehab and he’s motivated about it. He’s smart,” Vitti said of Bryant. “You can’t get ahead of the game on this thing, but you can get behind. He never got behind.”