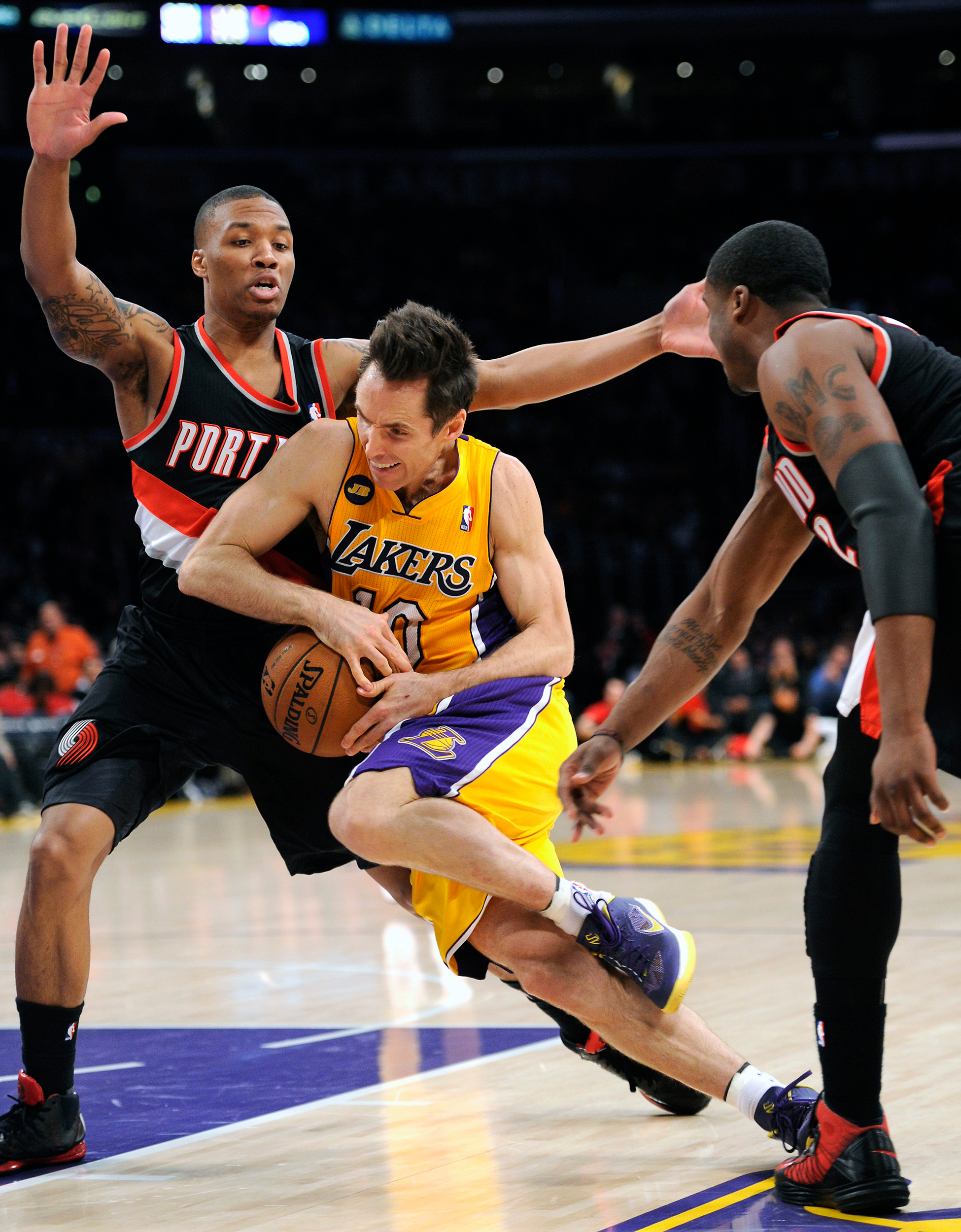 The Lakers say Steve Nash has fully recovered from his back and hamstring injuries. But the Lakers plan to limit him both in training camp and regular season games. Photo credit: Michael Owen Baker/Staff Photographer

The refrain played in the Lakers’ head after nearly every loss and every botched pass.

“If only Steve Nash were healthy.”

The Lakers thought this plenty of times considering Nash sat out a combined 32 games, first because of a fractured left leg followed by hamstring and back issues. Without him, the Lakers’ offense hardly resembled the Mike D’Antoni system that Nash ran with perfection through four seasons with Phoenix.

The Lakers no longer are worried about Nash’s health. Lakers general manager Mitch Kupchak described Nash as “100 percent” and has participated in the Lakers’ informal practices and scrimmages for the past four to six weeks. That’s good news for a team that became so saddled with injuries that Lakers trainer Gary Vitti described last season as “the toughest year for me” in his 30 years with the organization. But now that Nash has overcome his injuries, can he become the elite point guard that earned him two league MVPS and brought D’Antoni’s offense to life?

“I do,” Kupchak said. “We’re not expecting 35 minutes a game for Steve. But he is completely healthy right now.”

The Lakers’ plan to use Nash possibly even less than the 32.5 minutes he averaged per game last season for a few reasons. The Lakers want to preserve the 39-year-old’s body to maximize his chances of staying healthy. The Lakers have more depth at the backup point guard spot, including Steve Blake and Jordan Farmar. Kobe Bryant’s absence as well as limitations to Pau Gasol and Nash in training camp make the Lakers believe their 18-20 player roster will become competitive.

Yet it remains to be seen what Nash’s role exactly will entail, no matter how important.

“I think we’re a great team with the ball in Steve Nash’s hands,” Kupchak said. “But once again, I’m not sure how it will play out. With a training camp and increased depth at that position, there’s more confidence there than it was last year.”

Last year proved to be a disaster beyond Nash’s long-term absence.

Nash and Bryant soon exchanged positions. Bryant became more of a facilitator, while Nash became a shooting guard. Not a bad idea for someone who’s shot 49.1 percent from the field in his 17-year career, including 42.8 percent from 3-point range. Nash still averaged 12.7 points on a 43.8 mark from three-point range. But the Lakers never mastered their pick-and-roll potential both because Nash didn’t always have the ball and Howard rarely embraced it.

“The ball doesn’t end up in Kobe’s hands and that was an adjustment for Steve,” Kupchak said. “A lot of times Steve did end up playing off guard while Kobe facilitated for the second half of the year. Mike came in early in the season with a team that was injured, implemented his system and the whole season was a laborious process to win one game and the next game and the next game. There was never enough practice to buy into a system and really players didn’t have confidence in each other.”

The Lakers have a chance to do that this year with full training camp and a healthy Nash. But it appears even if they sorely missed Nash’s presence last season, the Lakers are making steps so they don’t need him more.