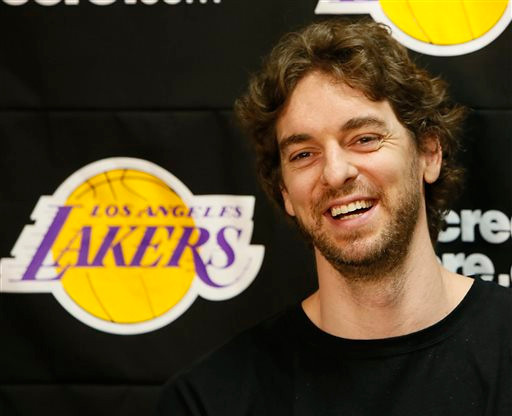 Pau Gasol recently stepped foot in Los Angeles in high spirits for reasons including a new season and a likely increased role.

There’s another reason, too.

Gasol visited with Dr. Steve Yoon of the Kerlan-Jobe Orthopaedic Clinic Thursday for an evaluation after rehabbing this offseason the tendinosis in both of his knees. Gasol then turned to Twitter to deliver a positive assessment in 140 characters.

Great news! My knees are a lot better thanks to the procedure, the rest & the hard work during the summer! Let's go! pic.twitter.com/NfblNoF9qF

Regardless, Kupchak had high expectations for Gasol, partly because of Dwight Howard’s departure to the Houston Rockets.

“If he’s healthy, he’s going to be an All-Star player,” Kupchak said. “He’ll be the focal point of our play in the paint.”

That was hardly the case last season.

Gasol missed 33 games for ailments including plantar fascia in his right foot, a concussion and knee tendinosis. Howard’s presence prompted Lakers coach Mike D’Antoni to use Gasol as a facilitator both as a starter and a reserve. Add all that up, and Gasol averaged a career-low 13.7 points on 46.6 percent shooting.

Since then, Gasol underwent a procedure called the “Fast Technique” in May, which entailed having a probe inserted into both of his knees to eliminate scar tissue.