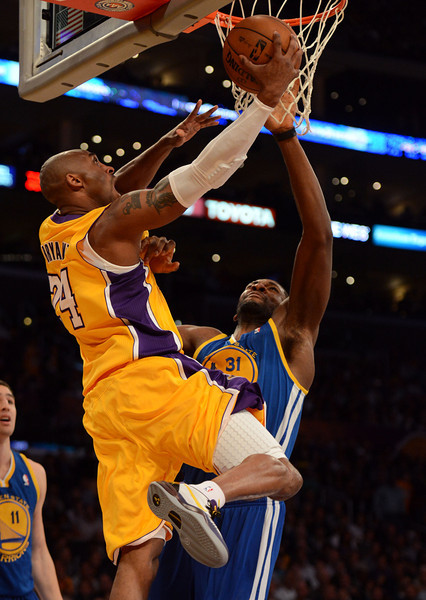 Very few times do the Lakers head into a season without the general public expecting an NBA championship. But with the Lakers beginning training camp today, plenty of intriguing storylines remain. Below are a look at the main ones.

1. How will Kobe Bryant’s recovery go? The Lakers haven’t offered a definitive timetable on when Bryant will return to the court after spending the past five months healing his surgically repaired left Achilles tendon. He’s still running on a weight-bearing treadmill and must progress toward basketball-related drills before taking the court.
Don’t expect Bryant to practice in training camp, or many of the Lakers’ eight preseason games. Knowing Bryant’s competitiviness, though, it’s possible he’ll return for the Lakers’ season opener Oct. 29 against the Clippers at Staples Center.

2. What will a full training camp do for Mike D’Antoni? The Lakers coach never received that luxury after replacing Mike Brown five games into last season. The Lakers’ talent dropped this offseason with Dwight Howard’s departure and waiving Metta World Peace in a cost-cutting measure. But the Lakers acquired pieces more suited for D’Antoni’s pick-and-roll, fast-paced system, including Chris Kaman, Nick Young, Wesley Johnson and Jordan Farmar. The verdict remains undecided whether the Lakers can overcome such variables. But the chemistry should likely improve this season with more time to go over D’Antoni’s concepts.

3. Will Pau Gasol have a breakout season? It appears Gasol will head into the 2012-13 season without any external circumstances diminishing his value. The Lakers expect Gasol to be fully healthy after missing 33 games last season due to various ailments, including plantar fascia in his right foot, concussion and knee tendinosis. Gasol will also have an enhanced role in the post after playing as a facilitator to make room for Howard and Andrew Bynum in separate seasons to have larger roles. With those dynamics gone, the Lakers envision Gasol becoming the same player that helped the Lakers to two NBA championships and three consecutive Finals appearances.

4. Can Steve Nash become an elite point guard again? The refrain played in the Lakers’ head after nearly every loss and every botched pass: “If only Steve Nash were healthy.” The Lakers thought this plenty of times considering Nash sat out a combined 32 games last season, first because of a fractured left leg followed by hamstring and back issues. Without him, the Lakers’ offense hardly resembled the Mike D’Antoni system that Nash ran with perfection through four seasons with Phoenix. Nash has since fully recovered from his injuries. But for the sake of maximizing his health, the Lakers plan to limit him both in practice and in games.