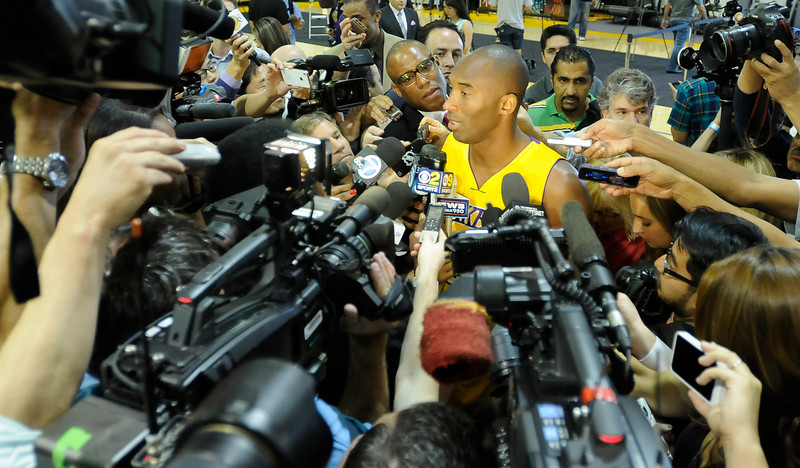 Looking back, Bryant sensed Howard leaving for Houston after he met with the Lakers’ brass two days into free agency. That meeting included Howard voicing frustrations about last season, according to various league sources familiar with what was discussed in the meeting. It’s not unclear to what degree he addressed them. But Howard’s frustrations last season included Bryant’s demanding leadership style, coach Mike D’Antoni preferring more pick-and-rolls than post-ups in his offense, and Howard receiving less credit than he wanted for playing through a surgically repaired back and torn labrum in his right shoulder.

D’Antoni didn’t refer to Howard by name. But it was clear who he was aiming at when he made heart of last season’s team when several players, including Howard, Pau Gasol and Antawn Jamison complained about their role.

Center Chris Kaman, whom the Lakers at the mini-mid level exception worth $3.2 million, even took shots at Howard on how his free agency “held up a lot of the bigs.” Still, Kaman believed Howard would drag out the process for so long that Kaman booked a vacation to Hawaii. But Howard met with five teams (Houston, Dallas, Golden State, Atlanta and the Lakers) before deciding his future in six days, and cutting Kaman’s vacation short.

“We were waiting to see what Dwight was going to do and where he was going to go,” Kaman said. “Once he made a decision, it opened up holes for other people.”

The Lakers have acknowledged the obvious talent dropoff stemmed with Howard’s departure both with his athleticism and defense. But they hope an added training camp, players more suited for D’Antoni’s system, a healthier roster and less drama surrounding the team will help the Lakers absorb Howard’s absence.

“My mind was open to either decision,” Gasol said. “He wanted to do what was best for him. But time will tell.”

Same thing with the Lakers. But for now, the Lakers seem to have a good riddance attitude toward Howard.