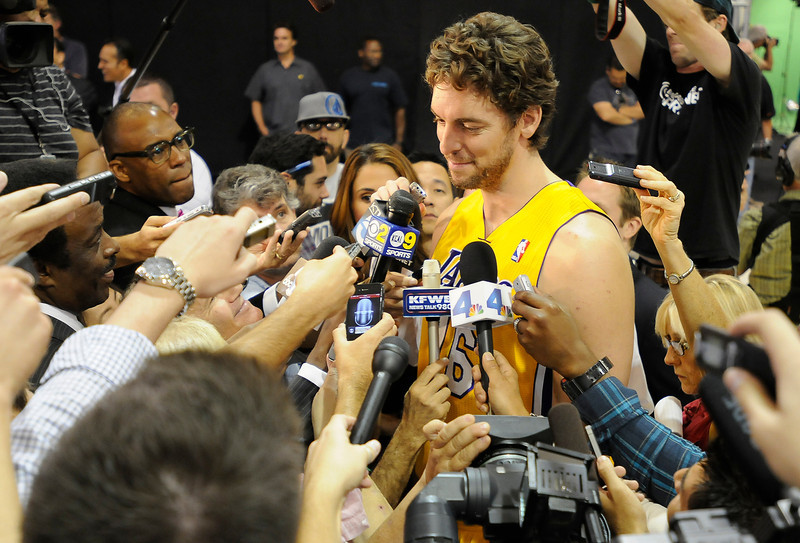 Pau Gasol has seemingly showed he has nine lives with the Lakers, staying on the franchise he loves despite demoted roles and endless trade rumors.

But even if Gasol arrived to Lakers’ media day on Saturday full of good spirits in having a chance to complete his fifth season donning purple and gold, there remains yet another hurdle he will have to climb.

He reported at full health after having a procedures this offseason to treat the painful tendons in both of his knees, but Gasol has yet to complete basketball-related drills.

“I’m getting there,” Gasol said. “Now training camp is going to be important with how we manage practices and how the knee reacts to the load of work.”

How the Lakers phase Gasol back into shape remains to be seen, regarding how much he practices and how many minutes he will play through eight preseason games. But the Lakers forward remains confident about one important thing.

“The main thing and goal is to be ready for opening night,” Gasol said, referring to the Lakers’ game Oct. 29 against the Clippers at Staples Center. “Whichever way it takes to get there, that’s what we’ll do.”

Gasol missed 33 games for ailments including plantar fascia in his right foot, a concussion and knee tendinosis. He then underwent a procedure called the “Fast Technique” in May, which entailed having a probe inserted into both of his knees to eliminate scar tissue. Gasol also revealed that he had treated some apparent back problems as well.”

“It wasn’t fun. It was a painful recovery at first. But a week after the procedure, I had to get the stem cells out of my back and shoot them up to my tendons so that irritated them again,” Gasol said. “But a few weeks after that, I was able to walk again.”

Still, there’s plenty of reasons why Gasol said he’s “excited” regarding the 2013-14 season.

Dwight Howard’s departure to the Houston Rockets propels Gasol into a Lakers’ starting center spot, leaving coach Mike D’Antoni suddenly gushy about a player he demoted at times last season to the bench. That leaves Gasol with plenty of reasons to think he’ll eclipse the career-low 13.7 points on 46.6 percent shooting last season.

“Being in a position where I can play a little bit more inside and be the reference inside and come back to that position makes me feel better and confident,” Gasol said. “I’m confident that I will be effective and deliver.”

After all, Gasol played a similar role that helped the Lakers to two NBA championships and three Finals appearances. In those instances, Gasol started at the power forward spot as a mid-range post player, while Andrew Bynum became the team’s defensive anchor. Later on in the game, Gasol played the center spot while Lamar Odom played the stretch forward position off the bench.

This season, the Lakers see plenty of possibilities. Gasol could start at center in the post, while Jordan Hill starts at power forward as the team’s defensive anchor. Gasol will also play with Chris Kaman, two versatile players that can both thrive on mid-range jumpers, pick-and-rolls and post-touches.

“My preference is to be more inside because I think I’m very effective there throughout the years and more productive inside to the team,” Gasol said. “I also like to mix it up. I don’t like to juts be inside and stay in that close range. It depends on the defense and the game. I like to mix it up a little but. But the majority of the time, I prefer to be inside. That’s where I think I’m a better player.”

Plenty of that, of course, will depend on Gasol’s health, a variable that kept him busy for most of this offseason.

“It wasn’t fun or easy,” Gasol said. “But now I can’t wait to start practicing and see the results.”