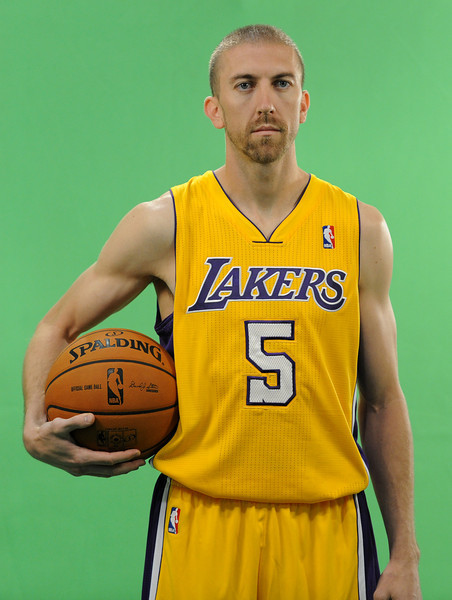 Anytime the Lakers gather together to watch film, an image of Steve Blake often pops up on the television screen.

“He’s always the guy we show,” D’Antoni said. “His effort is off the charts.”

Blake’s team mindset, scrappiness and comfort level in both running pick-and-rolls and looking for his own shot under D’Antoni’s system will play a critical role heading into the 2013-14 season for multiple reasons. Uncertainty looms on when Kobe Bryant will fully heal from his surgically repaired left Achilles tendon. D’Antoni hopes to limit Steve Nash’s minutes at starting point guard in hopes of preserving the 39-year-old’s body. And with the Lakers acquiring Jordan Farmar this offseason, Blake will compete for minutes for plenty of scenarios.

“With coach’s system, you can play a lot of guards,” Blake said. “We’ll be rotating in and out a lot, especially myself going to the shooting guard some and point guard. I’m going to be prepared for that. Whatever they ask of me, I’ll be willing to do.”

Blake’s answer shouldn’t be surprising. He’s always shown a team mindset and deferential to the Lakers’ coaching staff in his three seasons here. But as he enters the final year of a $4 million contract with the Lakers, Blake’s flexibility and proven success under D’Antoni will be needed at a time when the Lakers’ backcourt depth could offset looming health uncertainties surrounding Bryant and Nash.

“He hasn’t slowed down at all,” D’Antoni said of the 33-year-old Blake. “We have to keep him healthy. But last year he was a big key why we were able to turn things around.”

Blake managed to stay healthy this offseason by taking off for most of May to heal his strained right hamstring. He then prepared for likely playing at both point guard and shooting guard by mixing up his shooting drills, including ones off the dribble and on catch-and-shoot opportunities.

He also plans to lean on his time with the Portland Trail Blazers (2005-06, 2007-09) when he mostly guarded Bryant. Last year, Blake held Spurs guard Tony Parker in the Lakers Game 1 first-round loss to 18 points albeit on 8-of-21 shooting. Even though he stands at 6’3″, Blake plans to limit shooting guards by fulfilling the approach he outlined below.

“You just don’t let them get the ball,” Blake said. “They post up, you front the post and battle and make your teammates aware of what they’re trying to do. That communication really helps. The perimeter is not as big of an issue. The post is something where the team has to be on the same page where we try to make sure they don’t get the ball.”

Team accounts suggest Blake has carried over that mindset into the first four days of training camp.

“He’s tough. He’s feisty,” Farmar said. “He doesn’t take anything from anybody. He competes every night. You got to respect that.”

Blake vows he will stay ready for whatever awaits.

“For me personally, there will be a good comfort level there with what he expects and what he’ll be doing,” Blake said of D’Antoni. “I just hope to build off of what I did personally last year and what we did as a team.”