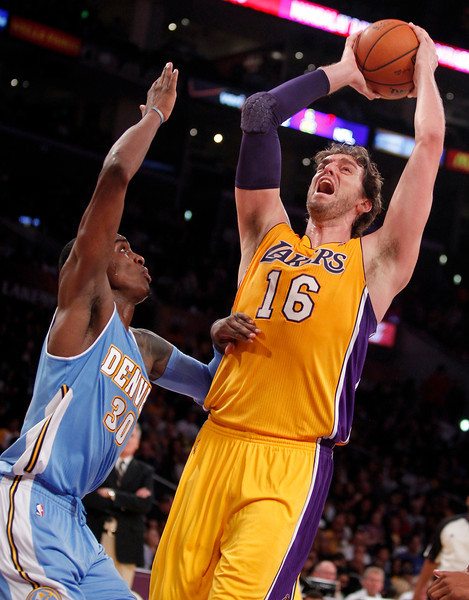 The barricades that have stood in Pau Gasol’s way for too long have finally moved.

Dwight Howard packed up his bags to Houston, leaving the post for Gasol to enjoy. Mike D’Antoni catered his system so that Gasol’s a featured center instead of a stretch forward on the perimeter. And Gasol’s creaky knees that felt so painful last season because of persisting tendinosis underwent a procedure this offseason to make them feel strong once again.

In the Lakers’ 97-88 preseason loss Sunday to the Denver Nuggets, Gasol admittedly felt a little “winded,” while his 13 points on 4 of 13 shooting featured plenty of open looks that didn’t drop in the bucket. But after facing a reduced role the past two seasons both to accommodate Andrew Bynum’s growth and Howard’s odds of staying here, Gasol welcomed the change in scenery where he became the featured big man in the post.

“That’s a good indication of how much liberty and how much my teammates also trust me to make plays and make shots and then, when the defense collapses, find them,” Gasol said. “I don’t want to run to it all the time, but a good portion of the game, I want to be able to operate from that position and make plays.”

Gasol made plenty of them.

He posted up inside. He directed the offense from the elbow. Gasol became the recipient of a Steve Nash cross-court pass that seth him up for a wide-open dunk.

The Lakers say Gasol should expect such looks even whenever Kobe Bryant returns to the court after rehabbing his left Achilles tendon for the past six months.

“He’s going to be very central to what we do,” Nash said. “He’s somebody we want to run the offense through a lot. Get him in pick-and-rolls. Get him in the post. Get him on the elbow and have him involved as a threat as much as possible.”

That didn’t happen last season as often as Gasol would have liked.

He averaged a career-low 13.7 points on 46.6 percent shooting. Gasol didn’t score above double-digits in 13 contests. D’Antoni also started Earl Clark for six games over Gasol because of his injuries, D’Antoni’s preference for a smaller and quicker lineup and his belief that Gasol and Howard couldn’t consistently coexist.

“I think he’s one of the most skilled big men in the game, still to this day,” said Nuggets coach Brian Shaw, who was a Lakers assistant when Gasol helped the team to back-to-back NBA titles in 2009 and 2010. “He’s had to endure coaching changes and philosophy changes right when he was probably getting to the point where he was the most settled. So, that’s an adjustment, and playing here — there’s a lot of pressure that comes with it. But, I think they’ll be able to get a training camp under their belt under D’Antoni, and I think he’ll get back up to the level that people around here are expecting him to play at.”

Once Gasol earned back his starting role and became a more focal point on offense, things started to blossom. In the last seven games of the regular season, Gasol posted three triple doubles. His 17.6 points per game average through seven games in April also represented his highest scoring output whenever he and Howard played together in the starting lineup.

The Lakers’ plan to feature Gasol in the same role, leaving the team with heightened expectations. Lakers general manager Mitch Kupchak believes Gasol will earn his fifth All-Star appearance, assuming he stays healthy. D’Antoni touted the 33-year-old Gasol as the league’s best center and guessed he could play for another five years.

What expectations does Gasol have for himself?

“I’m taking it one day at a time,” Gasol said. “I really can’t get too excited or too hyped when things go well or are going well. It’s a long season and my 13th season in the NBA. This year, I want to have a great year personally and collectively. I’m going to continue to work every day, stay focused and locked into what I have to do to make sure I do my part to be able to perform at my best. Then we’ll see how many years I play. I hope to be back on the All-Star team this year, but you have to earn that.”

Gasol made that first step toward reaching that goal by providing an impressive preseason debut as a featured big man.