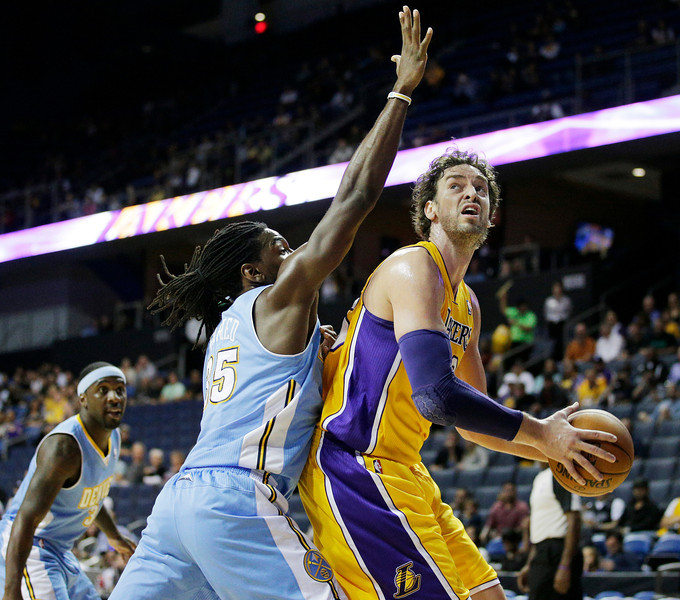 ONTARIO — As they moved around the court in what marked their first time playing together in a competitive game, Pau Gasol and Chris Kaman became mirror images of each other.

They both played pick-and-roll. They facilitated up top. They posted down low.

Never did they do this at the same time. Instead, they fulfilled that job description by playing off one another. Add up all the ingredients in the Lakers’ 90-88 preseason victory Tuesday against the Denver Nuggets at Citizens Business Bank Arena. And it’s clear that both Gasol and Kaman won’t have problems working together.

They combined for 26 points on 11 of 22 shooting and 15 rebounds in nearly 24 minutes of work, leaving the two eager to pepper each other with compliments on why the chemistry instantly clicked.

“He’s not just a big guy who will be in the middle of the lane operating in the post or the elbow,” Gasol said. “So his versatility, knowledge of the game and his unselfishness really helps our combination work well.”

After going head-to-head with Gasol in a 10-year career that included stops with the Clippers (2003-2011), New Orleans Hornets (2011-12) and Dallas Mavericks (2012-13), Kaman emphasized how much better the Lakers forward plays basketball than him. Kaman repeatedly gushed over Gasol’s superior playmaking and championship experience that spurred three NBA Finals appearances and two league titles in six seasons with the Lakers.

“It’s all going to be pretty simple. We pretty much do the same things,” Kaman said. “He’s definitely a better passer than I am. He shoots the basketball well, he can post up. I admire what he does out there.”

Underneath the apparent lovefest sparked a very strong evaluation from a key teammate that could enable this Gasol-Kaman duo to become hard to stop.

“I was pleasantly surprised,” Lakers guard Steve Nash said. “I would say it was exceeding my expectations.”

No expectations seemed too high for the Lakers last season.

That included visions of Gasol and Dwight Howard becoming an unguardable one-two punch inside. That included beliefs that Nash and Howard would endlessly connect on pick-and-rolls.

Instead, Lakers coach Mike D’Antoni initially thought Gasol and Howard couldn’t co-exist because it contradicted his preference for smaller and quicker lineups. Partly because Howard operated most effectively inside, Gasol’s versatility became reduced to a facilitating role that contributed to a career-low average of 13.7 points on 46.6 percent shooting. For reasons the Lakers could never understand, Howard also resisted playing pick-and-roll with Nash.

“Dwight had to play inside and Pau had to play outside. This year, one will be in and one will be out. But they can interchange,” D’Antoni said. “It just makes it easier both can play outside and both can play inside. That way we don’t have to keep Pau on the perimeter all the time and he can post up and be effective. Chris can do the same thing.”

Make no mistake, the Lakers are a worse team with Howard leaving for Houston.

He would’ve come into this season healthier with a full training camp and a season’s worth of experience to make his acclimation less rockier. The verdict also stays unanswered on if the Lakers can fill the team’s defensive void stemmed from Howard’s departure. Hence, perhaps why D’Antoni refused to bask in the Lakers holding the normally run-and-gun Nuggets to 88 points.

“They were in Los Angeles for two nights so…..” D’Antoni said, trailing off with a smile.

Despite saying he was “pretty pleased” with Gasol and Kaman and that “the chemistry looked good,” D’Antoni also refused to consider them the starting frontcourt after just three preseason games. After all, Gasol and Kaman split sitting out the first two games to pace their veteran-laden bodies. D’Antoni also described Jordan Hill’s eight-point effort on 3 of 5 shooting and 12 rebounds in 16 minutes against Denver as “his best game.” But as much as the Lakers will sorely miss Howard’s presence, Kaman and Gasol showed against Denver how they could become a better match for each other.

“They will play together in the game for sure,” D’Antoni said. “The thing that happens is I want Pau in the hole. He can do that with Chris. Chris is just as comfortable on the elbow and perimeter as Pau is. Both of them shoot the ball extremely well and both of them pass the ball. So they can take turns.”

That’s fine with both of them.

“I just want the opportunity to play,” said Kaman, who signed with the Lakers to a one-year deal at the mini mid-level worth $3.2 million after playing for Dallas last season earning $8 million. “I think coach D’Antoni is a very fair guy. He lets everybody have an opportunity, and then you need to do well to keep getting opportunities.”

“This is the best training camp I’ve ever had. He’s an awesome guy. He’s a players coach. I don’t know how he ever gets fired anywhere. I have a lot of respect for him.”

Plenty of Lakers fans, including the ones in the stands Tuesday night who called D’Antoni by his viral nickname “Pringles,” may react poorly to that statement. After all, Howard and Gasol both disliked D’Antoni’s system last season. Perhaps that’s why D’Antoni cringed when he shared his long-lasting gripe when he hears players complain about “touches,” something both Howard and Gasol uttered at times last season.

Yet, Gasol sounded more focused on how he and Kaman can complement one another and less on his own individual play.

“If one of us has it going, I’m totally fine with him operating more and getting the ball a little more. You have to take advantage of guy’s momentums,” Gasol said. “Based from the fact that I’ll be the focal point in the post and the ball goes a lot through me, he can also be productive in different areas.”

“If he’s open, I’m going to find him. He’s a big target and can finish with both hands. So he’s pretty versatile. Things are looking good so far. We just have to continue to work on every little detail and continue to build on the chemistry and understand what we’re doing out there.”

The Lakers are playing in preseason games where optimism still blooms strong. Kaman has gone through stretches in his 11-year career where he hasn’t stayed healthy and he has lost focus. Gasol still has to test out how his healthy knees and clear mind survive a taxing 82-game season.

But as far as making a solid first impression, both Gasol and Kaman easily passed the test.

Kobe Bryant on rehab: “I’m ahead of schedule”

Pau Gasol back in a featured offensive role