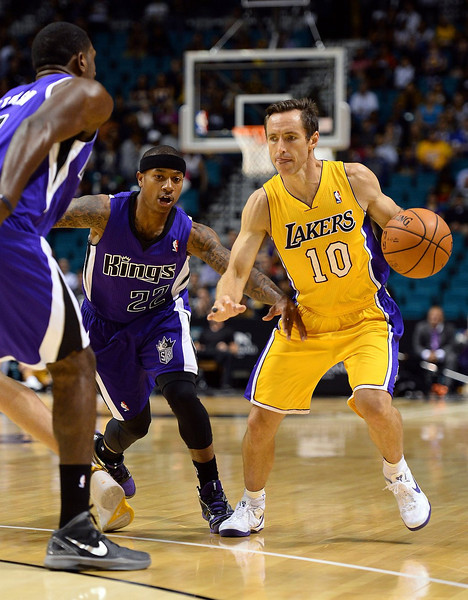 LAS VEGAS – Below are five things to take from the Lakers’ () loss Thursday to the Sacramento Kings at MGM Grand Garden Arena.

1. Steve Nash suffered a sore left ankle.Will this mark the beginning of another injury-filled season? Too early to say. But it’s hardly an encouraging sign that the point guard that missed 32 games last season because of a fractured left leg and persisting knee and hamstring issues sat out for reasons beyond pacing himself for the preseason. Nash posted zero points on one field-goal attempt with two assists and one turnover in eight minutes, 34 seconds before sitting out the last three quarters. Nash headed toward the locker room in the second quarter and didn’t return.

More developments will ensue on the severity of Nash’s injury. Either way, Nash told me after morning shootaround he had tweaked his left ankle shortly before training camp, though he said he had since healed it and it was never considered serious. Nonetheless, this injury adds more uncertainty on whether Nash can stay healthy this season.

2. Pau Gasol and Chris Kaman started again.The duo started partly because Jordan Hill had a sore right shoulder and played limited minutes. But Lakers’ coach Mike D’Antoni also featured Gasol and Kaman together because they’ve complemented each other so far through two preseason games. Against Sacramento, Gasol and Kaman combined for 25 points on 11 of 20 shooting, 11 rebounds and seven assists in 22 minutes.

The production consisted the usual mix of the two connecting with each other from high-to-low and the two hitting mid-range jumpers. Still, the duo struggled containing DeMarcus Cousins, who posted 16 points on 8 of 13 shooting and 12 rebounds in 26 minutes.

3. Steve Blake had a poor shooting night. After showing plenty of his consistency with his scoring and playmaking, Blake chose an awful game to have a bad shooting performance. He went scoreless on 0 of 10 shooting in 28 minutes, leaving Blake with no choice but to laugh after missing his last few shots. Considering Nash’s new injury and Jordan Farmar staying sidelined because of a strained right calf, Blake will likely assume more minutes in the remaining four preseason games. Even if these games mean nothing, the Lakers’ chemistry and offensive will largely hinge on Blake running the point.

4. The Lakers’ perimeter defense suffered.So much for the Lakers boasting length and athleticism on the wing. That took a backseat with Wesley Johnson missing his third game because of a strained left knee. But the Lakers hardly compensated, allowing the Kings to go 8 of 17 from three-point range. The Lakers oftenleft those shots uncontested.

5. The Lakers lacked much of a bench They shot a combined 6 of 37 from the field.