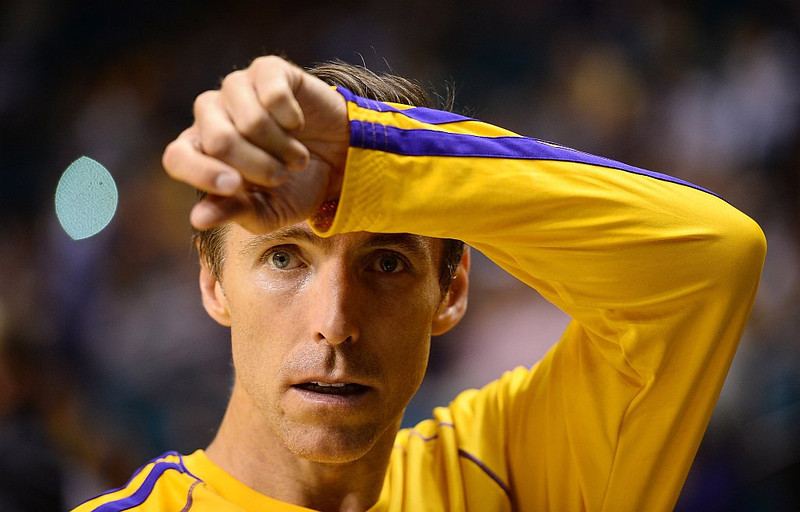 Steve Nash of the Los Angeles Lakers # of the Sacramento Kings during their preseason game at the MGM Grand Garden Arena on October 10, 2013 in Las Vegas, Nevada. Photo by Ethan Miller/Getty Images

LAS VEGAS — Lakers guard Steve Nash will miss the second half of the team’s exhibition game tonight against the Sacramento Kings because of a sore left ankle.

Nash sat out the entire second quarter and then headed to the Lakers locker room after going scoreless on one field-goal attempt and posting two assists and one turnover in eight minutes, 34 seconds of play.

In a wide-ranging interview with this newspaper for an upcoming story, Nash said following the team’s morning shootaround at MGM Grand Garden Arena that he had “tweaked it a little bit before the season.” But he said he had healed the ankle since then and that the injury was never considered serious.

The Lakers have limited Nash in practices and games in hopes the 39-year-old point guard will stay healthy. He missed 32 games last season, for reasons including a fractured left leg and persisting hamstring and back issues.

Through two preseason games, Nash had averaged two points and 5.5 assists in 21.9 minutes. Lakers coach Mike D’Antini sat Nash out of the team’s preseason opener to conserve his energy on the second night of a back-to-back game.