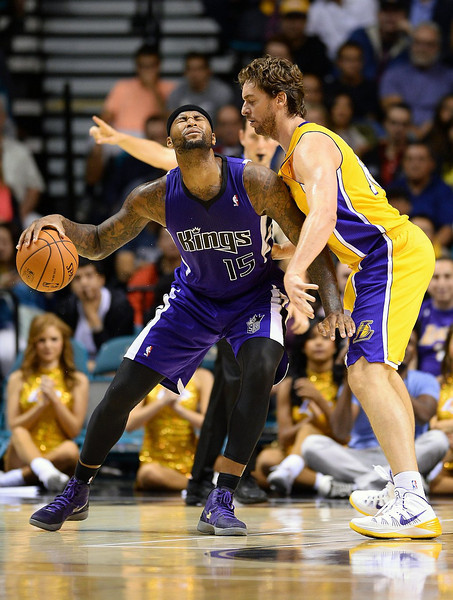 Las Vegas oddsmakers are skeptical the Lakers can win the NBA championship this season. Photo by Ethan Miller/Getty Images

LAS VEGAS — In between stops at the black jack and poker table, the Lakers could’ve headed over to the sports book where they stayed here at the MGM Grand Hotel for yet another reminder that few believe in their championship fortunes.

MGM Mirage’s race and sports director Jay Rood granted the NBA championship favorites to the usual suspects, including the defending champion Miami Heat (2/1 odds), Chicago Bulls (4/1), Brooklyn Nets (6/1), Oklahoma City Thunder (6/1) and the Clippers (7/1). The Lakers fall in nine place at 18-1 odds, a generous standing for a team a season removed from a first-round exit to San Antonio.

“If it was any other team, it would be in the neighborhood of 40/1,” said Rood, who attributes that Los Angeles’ proximity to Las Vegas and the Lakers’ popularity prompted him to change the odds. “We still take action with them. But if their struggles continue, I’m sure they’ll go up a little bit.”

The Las Vegas Hotel and Casino hasn’t waited to see how the Lakers absorb Dwight Howard’s departure to the Houston Rockets or when Kobe Bryant will fully heal his left Achilles tendon. They listed the Lakers with 100/1 odds to win their 17th NBA title, 45-1 odds to win the Western Conference and 40-1 odds to finish first in the Pacific Division.