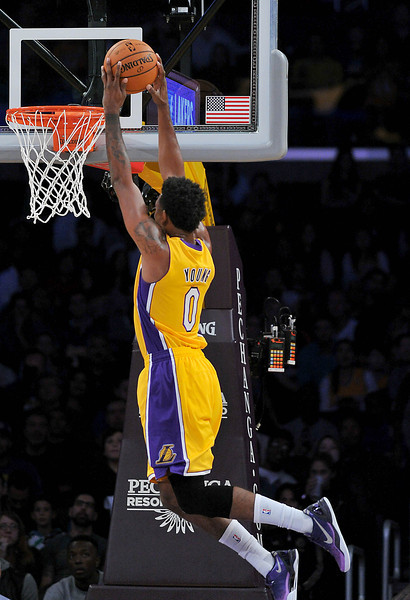 If it weren’t for the jersey number and the absent scowl, there have been plenty of instances Nick Young has impersonated Kobe Bryant pretty well.

He creates his own shot. Young rarely passes up a scoring chance. Bearing a smile instead of Bryant’s signature glare, Young exhibits a moxie that’s made him a comfortable fit in his hometown.

Add it all up, and Young has averaged a third-best 12.7 points per game average through seven preseason games as the team’s starting small forward. He’s also taken a team-leading 80 field-goal attempts, 18 more than Pau Gasol. But what about whenever Bryant returns from healing his left Achilles tendon?

“That’s all up for discussion, but I would expect for him to start and play,” Lakers coach Mike D’Antoni said. “Obviously he’ll adjust because Kobe will have the ball in his hands more. But everybody is going to have to adjust. It’s a welcome adjustment.”

Bryant wasn’t on the floor, obviously, in the Lakers’ 108-94 preseason win Tuesday over the Utah Jazz at Staples Center. But in a way, Young showed he was capable of making adjustments that will be needed upon Bryant’s return.

Young’s nine-point effort on 4 of 12 shooting and four assists revealed a concerted effort where he passed the ball more after missing five of his last six shots. That prompted Young to joke, “I might be John Stockton.” But it also showed he’s trying to round out his game into something beyond a gun-slinging scorer, a label that’s rightfully defined him for much of his six-year NBA career.

“He’ll always be that way,” D’Antoni said. “He’s a rhythm guy. He can get you 10 in a row or e can miss so many. I’m not worried about that. The only thing I watch on Nick is, Are you playing defense. He has the green light on offense. But he has to play defense. He has been doing that. He’s been rotating pretty well.”

Bryant will obviously carry a larger scoring load away from Young. But Young disclosed how Bryant has frequently advised him on how he should attack defenses and encourages him to watch more film of his game.

“That’s something I’ve been trying to get in my thoughts and just working on my game and talking to coaches,” Young said. “I’ve been talking to Kobe, too, about where to be at and picking my spots out there. He’s everything I thought he’d be. He takes the game seriously and is so passionate about the game.”

The talent disparity obviously remains between Bryant and Young, but D’Antoni’s remained impressed on Young’s passion for fulfilling his job description and then some.

“He’s taking better shots and on defense, he’s trying,” D’Antoni said. “If he does that, things will be great. One of the reasons he takes more shots is he can create his shot a lot easier than other guys.”

Hence, Young’s expected starting role even when the No. 1 shot creator returns.