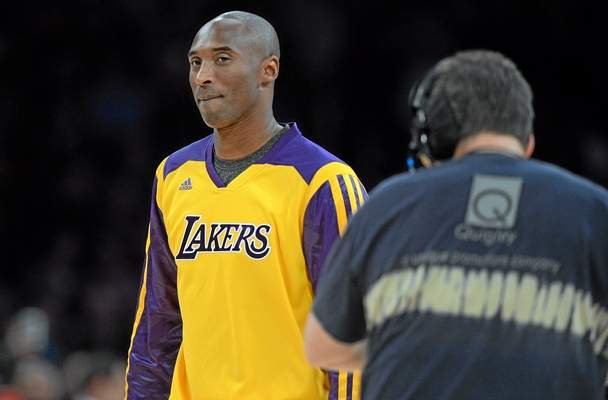 Kobe Bryant has agreed to a two-year extension with the Lakers, which will carry into his 20th NBA season. Photo by Hans Gutknecht/Staff Photographer

Below are five things to take from the Lakers signing Kobe Bryant to a two-year extension that a league source familiar with the deal said is worth $48 million:

1. The move reflected the Lakers’ optimism surrounding Bryant’s recovery: Bryant won’t play tonight when the Lakers (7-7) visit the Washington Wizards (5-8) at Verizon Center. But the Lakers haven’t penciled when Bryant will return from a torn left Achilles tendon beyond that. Still, that didn’t stop the Lakers from beginning formal negotiations with Bryant’s agent, Rob Pelinka,” in what a league source described as “a few weeks ago.” That timeline coincides with Bryant’s revamped activity including participating in two full practices last week.

Did Bryant’s step-back jumpers over Nick Young and Xavier Henry in practice suddenly convince the Lakers to reach a deal with the Black Mamba after initially planning to wait to see how he looks during his return? That’s a stretch, obviously. But the Lakers showed faith that Bryant’s well-documented ability to overcome injuries and prove a skeptical public will translate into his latest road to recovery.

2. The dollar figure also equates for the equity Bryant built in the Lakers’ brand: A source familiar with the proceedings described both the Lakers and Bryant as “happy” with what came out. Bryant’s two-year deal worth $48 million still secures the Lakers’ star as the NBA’s highest player through the 2015-16 season. But the Lakers managed to have Bryant still take a relative paycut from the $30.45 million he makes this season to accommodate for the league’s new labor deal that imposes harsher tax penalties for high-spending teams.

“Jim and Jeannie Buss’ feeling on it is this is what their dad would have done,” said a league source familiar with Bryant’s extension with the Lakers. “If he were still alive, he would have wanted to take care of him (Bryant) the same way.”

3. The move shows a shift in strategy in the Lakers’ free agency chase:Before this signing, the Lakers only had three players under contract next season, including Steve Nash ($9.7 million), Nick Young ($1.2 million) and Robert Sacre ($915,243), leaving them with plenty of purchasing power to pursue some top flight free agents in the next two years. The 2014 candidates include LeBron James, Carmelo Anthony, Zach Randolph, Rudy Gay and Luol Dang. The 2015 candidates include Kevin Love, Rajon Rondo, LaMarcus Aldridge and Marc Gasol.

OK, so pursuing James would’ve likely been a pipe dream considering he’s playing with the defending champion Miami Heat. But Bryant’s deal will enable the Lakers only to pursue one high profile free agent instead of two. So many factors obviously play into free agency. But from a financial standpoint, the Lakers reduced some of their financial flexibility. For hypothetical purposes: Say the Lakers managed to woo Anthony away this offseason from the New York Knicks. They’d have no more money available in 2015 to pursue someone, such as Love.

4. This move sets up the Lakers to find more veteran’s minimum players than ones in the $5-$8 million range. The Lakers managed to attract a brevy of free-agent players on one-year deals, including Chris Kaman, Wesley Johnson, Jordan Farmar, Shawne Williams and Xavier Henry. Given the circumstances, the move has helped the Lakers forge great locker room chemistry and attract players with an unproven past to show their worth through whatever means necessary in the purple and gold. If Bryant took a paycut more than what he has already taken, that still may not have been enough to ensure the Lakers enough purchasing power to pursue two high profile free agents anyway. After all, Bryant still ranks among those kind of players. So instead, the Lakers could’ve been left with average players on multi-year deals that would’ve just complicated the team’s purchasing power in 2016.

5. This could have a trickle-down affect on Pau Gasol and Nash:The Lakers also have to consider whether they’d wave Nash’s $9.7 million contract via the so-called “stretch provision,” especially since he remains hobbled with nerve issues in his back. The amount of Bryant’s contract could also signal the end of Gasol’s time with the Lakers, whose $19.1 million contract expires after this season. Given the Lakers will only have enough to pursue one high profile free agent, these scenarios seem highly possible. But a source familiar with the Lakers’ thought process said they haven’t considered that far ahead.