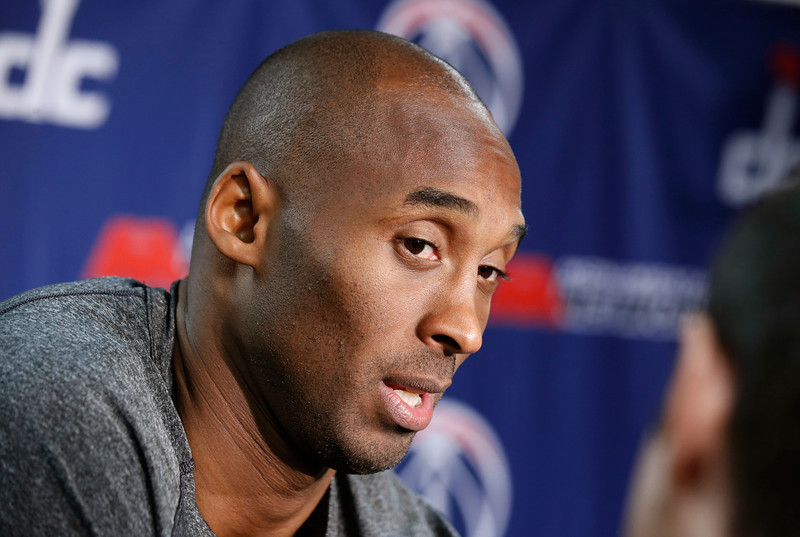 Los Angeles Lakers guard Kobe Bryant speaks during a media availability before an NBA basketball game against the Washington Wizards Tuesday, Nov. 26, 2013, in Washington. The Lakers signed Bryant to a two-year contract extension Monday, securing the fourth-leading scorer in NBA history into his 20th season with the franchise. (AP Photo/Alex Brandon)

WASHINGTON – Kobe Bryant sat down at a table bearing a bright smile.

The reasons were obvious.

In what he said will “probably” serve as his last contract, Bryant’s two-year extension worth $48 million with the Lakers essentially ensures he finishes a 20-year career with the purple and gold. ‘

“It makes me want to run through a wall for them,” Bryant said in a press conference Tuesday at Verizon Center. “It adds more fuel to the fire to be able to come out and prove to everybody that they’re right and everybody else is wrong.”

Bryant cant’ run through a wall yet, let alone run in an actual NBA game considering he’s rehabbed his left Achilles tendon for the past seven months. He will sit out when the Lakers (7-7) host the Washington Wizards (5-8) tonight at Verizon Center. Bryant penciled himself out of the Lakers’ remaining road games this week against Brooklyn (Wednesday) and Detroit (Friday) as well as home game against Portland (Sunday). Though he said he’s “feeling pretty strong,” Bryant said he remains “weeks away” from returning because he still needs to practice.

Bryant said he will join the Lakers when they resume their practice schedule Dec. 3 leading up to Dec. 6 when the Lakers visit the Sacramento Kings. Could Bryant make his return then?

“We’ll see. You start looking at some of those dates a little bit,” Bryant said. “Those three days when I come back will be huge in seeing what I can or can’t do day after day.”

Bryant said he wants to test what he described as his “explosiveness,” admittedly struggling with beating his teammates off the dribble and using his shoulder to create separation inside.

Those aren’t the only unsettling issues Bryant will have to answer.

Can the Lakers field enough of a roster to ensure Bryant wins his sixth NBA championship and perhaps beyond?

“From what I saw, absolutely,” Bryant said. “I think the fans are god bless them, they’re fans and have good intentions and a good spirit about it. But I don’t think they understand the cap or what strategically the Lakers are trying to do better than the Lakers do. I think we’ll be all right.”

Still, with Bryant remaining the NBA’s highest paid player, the Lakers will only have enough purchasing power to sign one top-level free agent. The 2014 candidates include LeBron James, Carmelo Anthony, Zach Randolph, Rudy Gay and Luol Dang. The 2015 candidates include Kevin Love, Rajon Rondo, LaMarcus Aldridge and Marc Gasol. Bryant’s deal will enable the Lakers only to pursue one high profile free agent instead of two.

“We have the opportunity to do that,” Bryant said. “I don’t know legally what I’m allowed to say or not say in terms of impending free agents and things like that. I stay away from that. But we have the ability to do something special. We have to see what happens. The Lakers are a standup organization. They stepped up to the plate and took care of me. Some of it obviously was the work previously done and the value and other things I’ve brought to the organization and some of it is a leap of faith of what they expect of me to do when I return despite my 25th ranking.”

Bryant was referring to the ranking a panel of ESPN writers gave him prior to the season that partly equated the uncertainty how he will recover from his Achilles tendon.

The Lakers obviously don’t have as much skepticism, extending his contract even before he returns from his injury.

Did that surprise him?

“It wasn’t like I was surprised or anything like that,” Bryant said. “I didn’t give it that much thought. There was so much going on in terms of things I was trying to focus on with my recovery and getting back to it. I really let them handle what was going on, but my understanding of it there was really no negotiation. The Lakers came out with a structure, system and plan that was win-win for everybody involved. From my perspective, it was pretty easy to accept it. It’s pretty quick.”

So quick that Bryant said the Lakers never asked him to take a further paycut.

“We had no conversation whatsoever,” Bryant said. “The only number I saw was the only one I agreed to.”

Lakers general manager Mitch Kupchak said in a conference call Tuesday with reporters that Bryant’s deal equated the amount of equity Bryant built through 17 NBA seasons in building the Lakers’ brand. That included Bryant winning five NBA championships, appearing in seven NBA Finals and becoming the Lakers’ franchise leading scorer, let alone enhancing jersey and ticket sales. But Kupchak also said the Lakers wanted to reach a deal with Bryant before he returned out of his respect for him.

“I didn’t make a big deal out of it at all,” Bryant said. “There was nothing. I kept my mouth shut the entire time. The amount of love and respect I have for the Buss family and organization trumps anything else that I wanted. I just wanted to come out and play. If they wanted to wait and see how I play, that’s fine. If they didn’t, that’s great. But I just wanted to come out and do what I do best and try to help this organization to get back to where it belongs.”

Even it means making sacrifices, such as limiting minutes.

“I’m comfortable with that for sure,” Bryant said. “The goal is to win a championship and put ourselves in a position to win a championship. I feel we have some really good pieces and guys who are really competitive, athletic and energy that can carry a game. I think they’ve been showing that particularly in the last three games. If I come back and keep my minutes to a minimum, that would be perfect.”

With that, Bryant then poked fun at outgoing NBA Commissioner David Stern for nixing the Chris Paul trade in 2011.

“The Lakers have always been an organization that seems to make the right decisions,” Bryant said. “I think it’s lucky for me and the Laker organization this smart business decision they made business wise can’t be revoked by the NBA.”