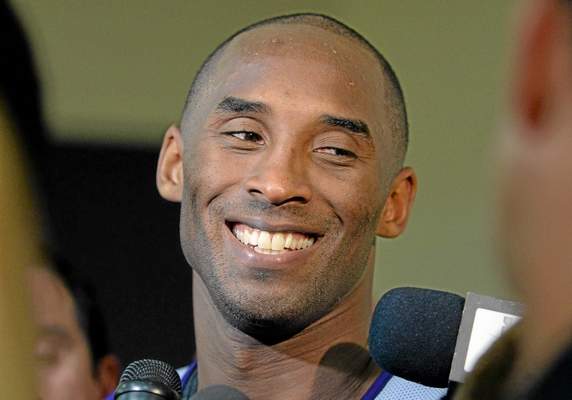 The Lakers extended Kobe Bryant’s contract for two more years for $48 million even though the superstar has yet to play this season while recovering from a torn left Achilles tendon suffered in April. Photo by Steve McCrank/Staff Photographer

WASHINGTON D.C. — Kobe Bryant’s two-year, $48 million extension may have boosted his spirits. But it didn’t suddenly expedite his recovery on his torn left Achilles tendon.

Bryant won’t play tonight when the Lakers (7-7) visit the Washington Wizards (5-8) at Verizon Center. Lakers coach Mike D’Antoni also doubts Bryant will play on the rest of the Laker’s week-long trip with stops in Brooklyn (Wednesday) and Detroit (Friday).

“That wouldn’t change it that [he] got a contract,” D’Antoni said. “There’s no indication, but he’s still working toward it and rehabbing it.”

Bryant didn’t speak to reporters after the Lakers’ morning shootaround. But it’s possible he will speak before the game presumably about his new contract and his recovery. D’Antoni sounded thrilled that this happened earlier than expected beyond securing Bryant playing with the Lakers through the 2015-16 season in what will mark his 20th year in one lone organization. D’Antoni also mentioned the Lakers and Bryant reached a deal well before media coverage would grow on an undecided issue.

But Bryant’s extension seemed surprising namely because the Lakers reached a deal with him before he even returned to the court, signaling the franchise’s unyielding optimism on how he will play once he fully heals his Achilles tendon.

“All indications show that. As hard as he works, I don’t know the whole thought process. I shouldn’t talk for them. Mitch needs to talk. But I think it’s a thing to showi loyalty and everything else and what he means to the franchise going forward. It’s good.”

D’Antoni shares the same optimism, saying, “I have no doubts he’ll be at a very high level.”

“I would never doubt Kobe,” D’Antoni said. “I think what he’s shown just with the little stuff and the practice he’s had, he’s going to be fine. He’s going to be normal.”