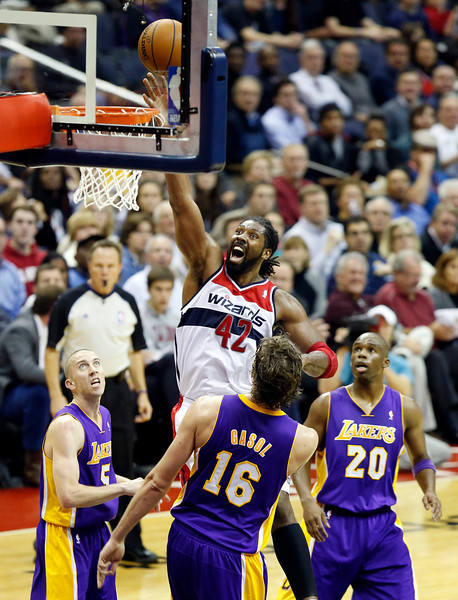 WASHINGTON — The only thing that has remained consistent about the Lakers season involves their inconsistency.

They find a way to overachieve with a handful of castoffs, but lack a pecking order in their offense. The Lakers show effort on defense through teamwork and hustle, and then they don’t. They valiantly fight to the very end, but without the definitive closer in Kobe Bryant to finish the job.

So it should hardly serve as a surprise the Lakers’ 116-111 loss Tuesday to the Washington Wizards Tuesday at Verizon Center, following a three-game game winning steak. The Lakers (6-7) have shown those struggles all season, particularly where on the road where they have gone 1-5. A game tonight against the ailing Brooklyn Nets (4-10) might do the trick, but the Lakers are 0-3 on the second night of back-to-backs.

“You expect that out of a young team and a pretty new team,” said Lakers center Pau Gasol, whose 17 points on 8 of 15 shooting, eight assists and six rebounds were offset with five fouls and four turnovers. “We don’t expect to have a great record on the road at this point.”

The Lakers showed plenty of offensive balance in Jordan Farmar (22 points), Gasol (17 points), Nick Young (16 points), Steve Blake (15 points), Wes Johnson (11 points) and Jordan Hill (10 points). But none of them could take the mantle in the final minutes.

The Lakers committed 19 turnovers, including two from Steve Blake that entailed a shot clock violation and a deflected pass directed toward Jordan Farmar on consecutive possessions in the final minute. Blake shook his head and stared down the floor in frustration.

“I was disappointed,” Blake said. “I made a mistake. I have to move on. But I was just disappointed.”

Gasol converted on a three-point play that cut the Lakers’ deficit to 113-110 with 24.5 seconds remaining. But after Nene made one of two free throws, Nick Young missed a potential game-tying three-pointer with 14.3 seconds left. Gasol then missed a wide-open layup before time expired.

So much for all that effort in slashing a nine-point fourth-quarter deficit.

“We’re getting comfortable and rushing a little bit,” Young said. “Kobe isn’t there so we’re still trying to get comfortable with getting that closer.”

After holding Sacramento on Sunday to a season-low 86 points, the Lakers’ defense suddenly disappeared.

The Lakers allowed Wizards forward Nene to score a career-high 30 points on 13 of 22 points, while the Wizards posted 56 points in the paint. Lakers coach Mike D’Antoni also attributed the team’s poor consistency on pick-and-roll defense in contributing to Wizards guard John Wall dropping 31 points on a 10 of 18 clip.

“I didn’t think we were gritty,” D’Antoni said. “We just didn’t move with the same authority we have been. It happens. We’ll get back on it and try to do a better job the next time.”

The problem is, it’s hard to anticipate which Lakers team will emerge as the season-wide trend of inconsistency continues.