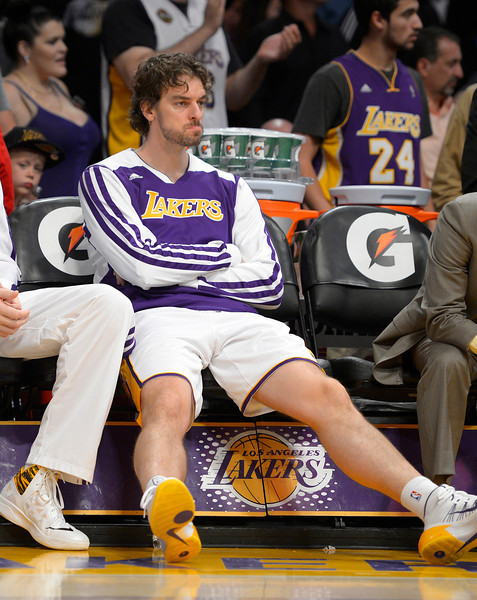 Los Angeles Lakers center Pau Gasol, of Spain, sits on the bench during the second half of an NBA basketball game against the Portland Trail Blazers, Sunday, Dec. 1, 2013, in Los Angeles. (AP Photo/Mark J. Terrill)

Well, all those variables have wiped out. The Lakers feature Gasol. Bynum and Howard are gone. Bryant has still sidelined with a left Achilles tendon. Gasol’s respiratory ailments have evaporated, and an MRI this week showed the sprain in his right ankle is only minor.

Yet, Gasol hasn’t been effective, averaging 14.3 points on 41.9 percent shooting and 9.9 rebounds and is only five days removed from posting six points on 3 of 15 shooting in the Lakers’ 114-108 loss Sunday to the Portland Trail Blazers. In that game, Gasol missed six mid-range jumpers while making only one field goal in the paint. His season-long shot chart shows this has become par for the course.

Why has Gasol remained at the top of the key again?

“He can always move closer to the basket,” Lakers coach Mike D’Antoni said. “That’s on him. He needs to dive and we need to get the ball into him. He needs to go where he feels comfortable.”

Gasol has hardly looked comfortable this season despite a heightened role and a coach willing to feature him more. His numbers also fare only slightly better than his career-lows last season, when he averaged 13.7 points on 46.6 percent shooting in 33.8 minutes amid a reduced role and various ailments that sidelined him for 33 games. Gasol’s play looked so bad in the Lakers’ loss Sunday to Portland that backup center Robert Sacre played in the fourth quarter over him en route to a career-high 12 points and seven rebounds.

“Pau has been extremely vocal more than I’ve ever seen him since I’ve been out,” Bryant said. “We’ve needed that from him. He’s continued to do that. My job has always been to challenge and to push and to elevate the competitive spirit of the team. I’ve always been lurking the background and cracking the whip from a distance.”

But that hasn’t consistently translated into Gasol playing well. This time, it has little to do with external factors.

“He’s a good enough player where he can be inside, outside,” D’Antoni said. “But there’s no limitations where we say, ‘Please don’t go in there.’ There’s none of that. He needs to go in there.”

Lakers pick up the pace, and find success