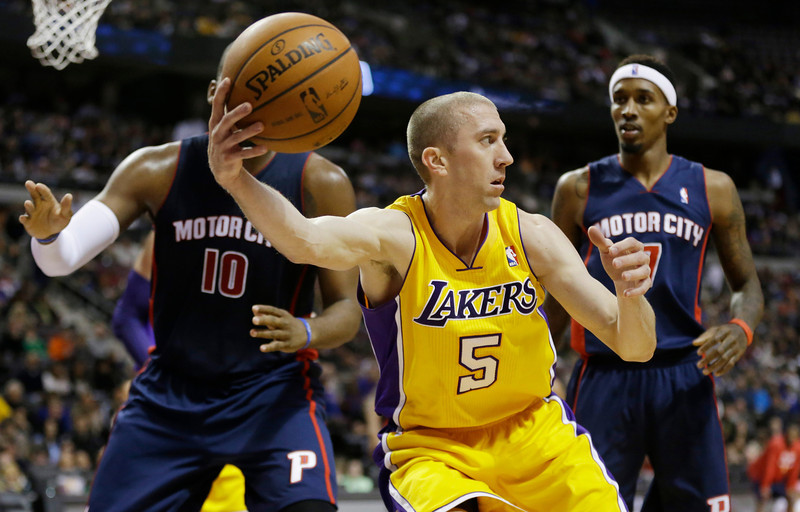 Through four seasons with the Lakers, Steve Blake has never publicly uttered any criticism about a teammate, coach or his role.

Yet, with a visibly upset Blake providing clipped answers to reasonable questions in a post-game interview aired on Time Warner Cable SportsNet following the Lakers’ 106-94 loss Sunday to the Toronto Raptors at Staples Center, sports talk radio hosts and Laker fans alike speculated both on Twitter and on the airwaves that it served as a cryptic message.

The most thrown around theory involved Blake being upset that Kobe Bryant’s return to the lineup after staying sidelined for the past eight months reduced his role as a playmaker. But Blake said his demeanor had nothing to do with Bryant’s presence. Instead, Blake said it had everything to do with both the loss and his play where he posted three points on one of six shooting and four turnovers.

“If you saw the game, I played like crap and we lost the game,” Blake said. “Would you expect me to be happy? That’s all it was. I was mad. I didn’t play well. We lost the game after we had been playing so well. For us to take a step back like that, it was unacceptable for me and us as a team.”

Blake also downplayed Bryant’s role in the loss despite posting only nine points on 2 of 9 shooting and committing eight turnovers.

“I don’t think it was Kobe,” Blake said. “It was us. As a team, we didn’t have the effort we should have. For me, personally I didn’t have the performance I should’ve had. It’s a combination of all of that.”

Nonetheless, Blake conceded the adjustments he may encounter as the Lakers try to incorporate Bryant into the lineup. To account for Bryant’s diminished athleticism and the absences to Steve Nash (back) and Jordan Farmar (strained left hamstring), Lakers coach Mike D’Antoni has made Bryant a de facto point guard in hopes his facilitating will ensure  team balance.

“You kind of defer a little bit more,” Blake said. “He’s a guy who can bring it up the floor and run pick-and-rolls and create for people. I won’t be getting every outlet pass as I was and dictate the offense right now. I’ll get back to running into the corners a little bit more and getting used to that part of the process.”

Blake has averaged a steady 9.8 points and 7.6 assists this season partly because D’Antoni’s quicker-paced offense taps into his playmaking instincts. Blake didn’t have that freedom in Phil Jackson’s triangle offense in the 2010-11 season because the system doesn’t feature point guards with a traditional role. Mike Brown’s offense in the 2011-12 season featured a heavy playbook.

How can Blake still remain the same effective playmaker if Bryant’s presence takes away some of that freedom?

“It’s going to be a little bit of a challenge,” Blake said. “But I was doing that a little bit earlier in the year when Nash was playing. So I’m going to have to get comfortable with that situation again hopefully sooner than later. It’s what you have to do as a player. You have to adjust to your teammates and what’s going on.”

It sounds as if D’Antoni’s receptive to adjustments too.

D’Antoni suggested he’d like a better balance between Bryant and Blake handling the point guard duties.

“I don’t want to lose Steve because I think he should,” D’Antoni said. “They’ll split. But like anything else,when you have the ball, you’re the playmaker. Whether it’s Shawne Williams at the 4 or Pau at the 4, you have to make a play. You know Kobe is going to have the ball a lot. He’s going to make a lot of plays. People get his share. We don’t want to diminish that.”

So how should that dynamic play out?

“Steve will bring it up. He’s the point guard. But if Kobe rebounds, he’ll push it,” D’Antoni said. “If the ball is swung around, it’ll be in Kobe’s hands and he’ll be making a play. They just have to play off each other. You can’t designate, ‘This time you make a play’ and ‘that time you make a play.’ They all make it. Kobe, by being so talented and so good, will make most of the plays. That’s just the way life is.”

But that doesn’t mean Blake will complain about it. Instead he’ll focus on the Lakers’ on-court adjustments.

“We have to make better decisions,” Blake said of himself and Bryant. “For me, I just made some bone head plays I didn’t need to make. For him, I think it’s his first game back in so long. I don’t think he’ll be making plays like that.”

Kobe Bryant grades himself an F on his return