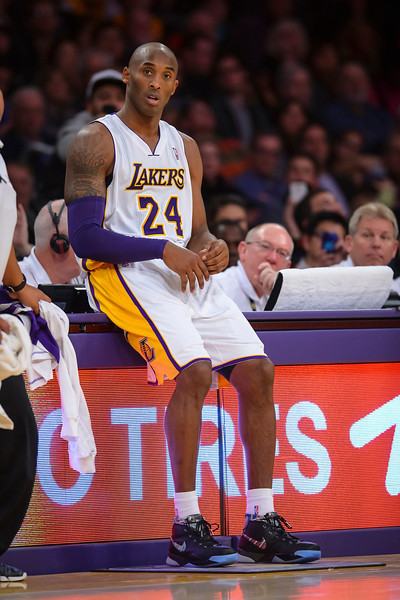 OKLAHOMA CITY — A mere week after still trying to improve his explosiveness in practice, Kobe Bryant will have the thankless task when the Lakers visit the Oklahoma City Thunder tonight at Chesapeake Energy Arena with primarily defending speedy point guard Russell Westbrook.

Bryant had successfully defended Westbrook in the 2010 NBA playoffs. But these circumstances are different. Bryant’s playing in only his third game since recovering from his left Achilles tendon for the past eight months, and has appeared noticeably limited with his minutes (28.5) and speed.

“It is asking a lot, but he’s smart,” Lakers coach Mike D’Antoni said. “Westbrook is a hard matchup for anybody. But I trust Kobe more than a normal person in figuring it out.”

Why such the heavy responsibility on Bryant? Simple.

The Lakers are nursing injuries to all three of their point guards, including Steve Nash (back), Jordan Farmar (strained left hamstring) and Steve Blake (torn ulnar collateral ligament in right elbow).

“We have enough guys here,” D’Antoni insisted. “We can win. But we’ll do it a different way. I’m encouraged about tonight and this road trip and see what can get done.”

The Lakers plan to provide reinforcements behind Bryant.

D’Antoni said he will start Wesley Johnson at small forward and Jordan Hill at center a game after the team’s smaller lineup conceded 56 points in the paint Tuesday to the Phoenix. The Lakers will also feature Xavier Henry, Jodie Meeks and Johnson helping out on Westbrook considering Bryant’s unlikely to play more than 30 minutes. Westbrook also has averaged 21.9 points and 6.4 assists on only a 41.2 percent clip, a slight dropoff after having two knee procedures this year.

“If we do what we’re supposed to do and close the paint down and make him take contested 2’s. that’s what we want to do against Westbrook,” said D’Antoni said. “He will get out in transition. So the biggest thing is not turning the ball over and not letting him run. With shots, we have to run back. There’s things we can control. We haven’t been doing things we can control. That’s shutting down the middle. We have to do that.”

Westbrook averaged 28.5 points last season in four games against the Lakers. He also posted a career-high 27 points in the first half Dec. 7, 2012 against the Lakers. Then there’s Kevin Durant, who leads the NBA in scoring (28.4 points on 47.2 percent shooting).

Still, after seeing Bryant perform the miraculous many times before, D’Antoni believes his star can do it again.