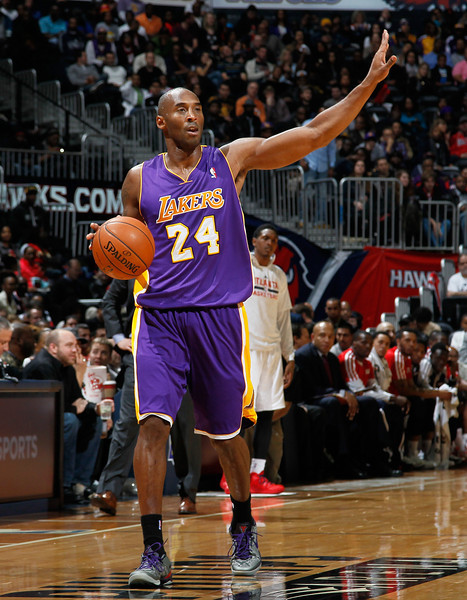 Kobe Bryant #24 of the Los Angeles Lakers calls a play against the Atlanta Hawks at Philips Arena on December 16, 2013 in Atlanta, Georgia. (Photo by Kevin C. Cox/Getty Images)

Both former President Bill Clinton and Lakers guard Kobe Bryant plan to lead a panel next month on issues involving youth sports, including barriers to access, quality coaching and health and safety concerns.

The roundtable discussion will take place at the Clinton Health Matters Initiative Conference on Jan. 13 in La Quinta, Calif. and highlights will air later on ESPN 2 on Feb. 9.

“There’s so much to be gained, so much from health and fitness,” Bryant told The Associated Press. “It’s a really important initiative for kids to understand that you’re not just getting the benefits of being healthy. You’re also understanding how to be great leaders, how to be unselfish and how to work within a group with a competitive spirit.”

The Aspen Institute, Clinton Foundation, ESPN and Nike’s Access to Sport Initiative has sponsored the event. Bryant has had ties to Nike in recent years, through both his shoes and overseas trips most notably to China. The telecast of the rountable will air at some point in prime time after the Lakers host the Chicago Bulls at Staples Center at 12:30 p.m. PST Feb. 9 on ABC.

ESPN senior president Rob King told the AP that U.S. Olympic Committee CEO Scott Blackmun will participate in the panel as well as undetermined NFL players depending on which teams have been eliminated in the playoffs. The program also plans to feature interviews with athletes and segments on issues, such as the number of children who don’t have access to sports. This event also coincides with the PGA Tour’s Humana Challenge from Jan. 16-19 in La Quinta.

“Obviously I’ve been the beneficiary of learning all those things,” Bryant said told the AP. “So I think it’s very important to be able to communicate that.”

Kobe Bryant vows to stay patient with his progression

It all slips away from Lakers in Atlanta