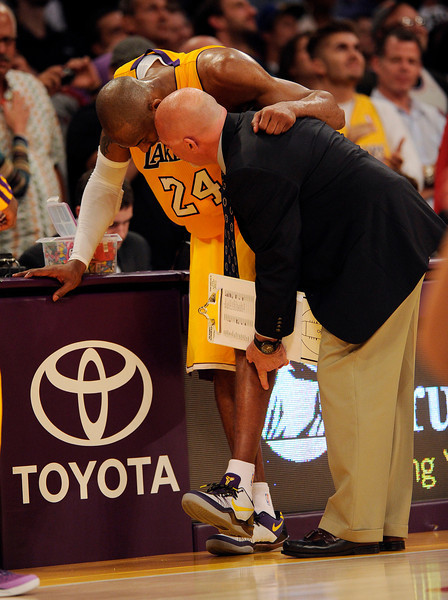 Lakers’ Athletic trainer Gary Vitti looks Kobe Bryant #24 after he hurt his ankle during their game against the Warriors at the Staples Center in Los Angeles Friday, April 12, 2013. The Lakers beat the Warriors 118-116. (Hans Gutknecht/Staff Photographer)

Barnes had just defended Bryant when he unexpectedly slipped in the waning minutes of the Lakers’ regular-season game April 12 against the Warriors at Staples Center. Barnes then learned Bryant had torn his left Achilles tendon, an injury that ultimately would sideline him for the next eight months.

Shortly after, Barnes spilled out his thoughts to Bryant.

“He had taken a few hard fouls earlier in that game. I just didn’t want him to think it was anything malicious or that I was trying to go after him or anything like that,” Barnes told this newspaper before the Lakers played Golden State on Saturday at Oracle Arena. “I touched base and wished him well. He said it was all good and he didn’t anything of it.”

Incidentally, Bryant had hoped his fall stemmed from Barnes fouling him too hard. Medical experts often describe an Achilles snapping feeling similar to someone kicking it. Barnes confirmed the Lakers’ account that Bryant and his teammates asked Barnes directly if he had done that.

“I said, ‘No I didn’t,’” Barnes said. “As soon as I said that, you could tell by the look on his face that something serious happened to him. I realized it was more than just someone falling to the ground.”

Yet, Bryant still made two foul shots before essentially walking off the floor on one foot.

“You don’t see many people with a torn Achilles able to make free throws,” Barnes said.

Bryant hasn’t written a Hollywood ending yet with his recovery.

He had averaged 13.8 points on 42.5 percent shooting, 6.3 assists and 5.7 turnovers in 29.5 minutes through six games, a drastic dropoff from his career average of 25.5 points per game on 45.4 percent shooting in 36.6 minutes. The Lakers also expect Bryant to stay sidelined for six more weeks after fracturing his left knee.