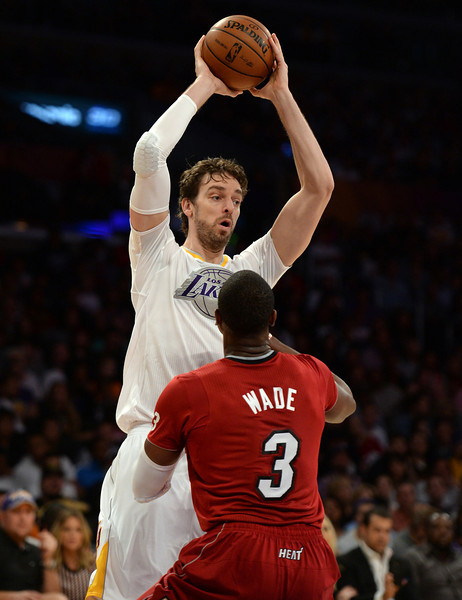 Long after everyone else cleared the practice court, Pau Gasol remained there working on post moves, mid-range jumpers and conditioning drills.

Once it was all done, Gasol stuck his head into a trash can and coughed out the built up mucus stemmed from a upper respiratory infection that kept him out of three of the past five games. Gasol will suit up when the Lakers (13-18) host the Milwaukee Bucks (6-24) Tuesday at Staples Center.

But the image revealed two things. It aimed to contradict the notion that Gasol was using his season-long ailments as an excuse either to sit out or not play with full effort. It also caused some team officials to roll their eyes at the apparent theatre before Gasol spoke to reporters. Whatever the case may be, Gasol sounded both determined to play through his latest ailments and unapologetic for sitting out earlier.

“I tried to play through it as much as I can. “I played through it when I first got the respiratory issue earlier in the season and I was getting killed by not performing and all that stuff,” said Gasol, who has 14.7 points on a career-low 44.6 percent shooting. “When you try to play through stuff, you still don’t get any credit. You don’t play through stuff, you still don’t get any credit. You’re not going to get credit much especially when things aren’t working out and the team is losing .It is what it is. I’m trying to do what’s best for myself and the team in this case.”

Lakers coach Mike D’Antoni has criticized Gasol this season, namely arguing his struggles stemmed more from an inconsistent work ethic than any gripes about how his system features him on offense. But D’Antoni defended Gasol regarding his upper respiratory infection.

“That’s very unfortunate that a teammate would even think about that and say that in the media,” D’Antoni said. “That’s not right and definitely wrong. Pau was sick. He’s getting better now and will be ready tomorrow.”

Gasol dealt with the ailments all season, but recalled feeling worse following the Lakers’ win Dec. 20 against the Minnesota Timberwolves. Gasol sat out the following day in the Lakers’ loss to Golden State and then returned with sub-par performances Dec. 23 against Phoenix (10 points on 4-of-12 shooting) and Christmas Day versus Miami (whose 13 points on 6-of-12 shooting and 13 rebounds was offset with Chris Bosh posting 23 points). Afterwards, Gasol recalled feeling “exhausted.”

Gasol visited an ear, nose and throat specialist last Wednesday, whom Gasol said diagnosed him with sinusitis and bronchitis. Gasol also reported dealing with constant coughing, breathing issues and infected cavities. He participated in some light weight-training during Sunday’s morning shootaround in preparation for the Lakers’ game that night against Philadelphia in Staples Center.

Could Gasol have played then?

“I tried and it crossed my mind,” Gasol said. “But I just get very exhausted and winded when I get my cardio up. I didn’t want to have any setbacks to prolong this thing more than it has to. I wanted to badly because it was a game we needed to win. Unfortunately, I wouldn’t have been of much use.”

Gasol then downplayed whether his presence could’ve resulted in the Lakers’ snapping their four-game losing streak.

Gasol described his recovery as “a work in progress” and just recently took antibiotics to treat his symptoms. Gasol also sounded unsure how his conditioning will hold up or how much he can actually play.

“Hopefully I can sustain the energy and effort for longer periods of time and I can be out there on the floor as long as for 48 minutes,” Gasol said. “I would love to. Unfortunately, that won’t be reasonable.”

What will be reasonable?

“I have to play through it,” Gasol said. “It is what it is. We’re already shorthanded and we need everything we can get out there. I’m going to do my best.”