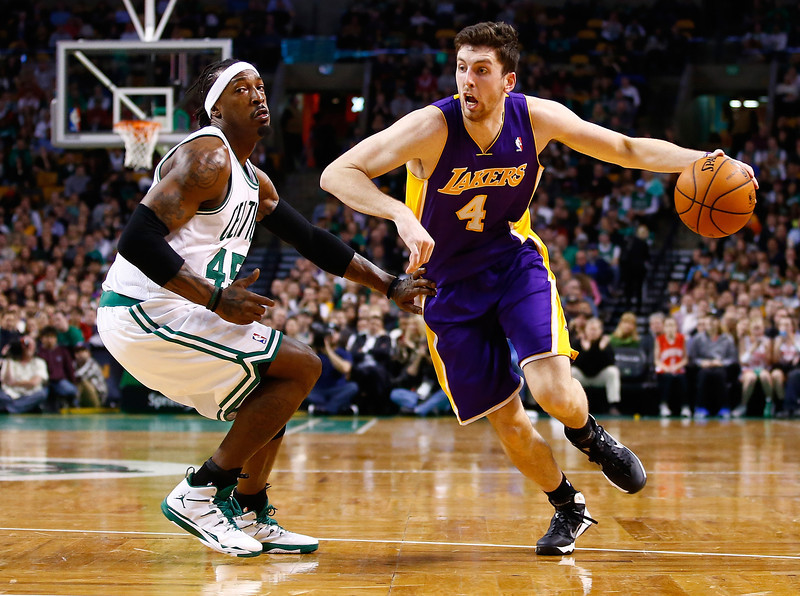 Ryan Kelly #4 of the Los Angeles Lakers drives to the basket past Gerald Wallace #45 of the Boston Celtics in the second half during the game at TD Garden on January 17, 2014 in Boston, Massachusetts. (Photo by Jared Wickerham/Getty Images)

The Lakers rookie forward received a painful reminder of that when the team bus didn’t wait for him following the Lakers’ 107-104 victory Friday over the Boston Celtics at TD Garden. Even after posting a career-high 20 points on 6-of-12 shooting in 34 minutes, Kelly needed to hail a cab to go back to the team hotel.

The Lakers are noticing his progress, though. So much that Coach Mike D’Antoni said he will start Kelly over Jordan Hill at power forward when the Lakers (15-25) play the Toronto Raptors (20-18) on Sunday at Air Canada Centre.

“He’ll have to get used to playing every night and more minutes,” said D’Antoni, who traditionally prefers so-called stretch forward over bulkier big men. “The biggest thing is to keep him on the floor and out of foul trouble. He seems to have a tendency to do that. But he’s going to give us toughness, smarts, move the ball and hopefully he makes open shots.”

Such a promotion carries some risk.

Kelly has posted modest numbers, averaging 4.8 points on 38.5 percent shooting. But prior to the Lakers’ win over Boston, Kelly never attempted more than seven shots in a game. D’Antoni hardly believes Kelly will replicate his 20-point game against Boston. The Lakers also could be further compromised in rebounding, a category they already rank 16th overall (43.1) and 30th in opposing team’s rebounds (48.1).

“We don’t rebound anyway,” D’Antoni joked. “It’s not going to be any more challenging than it is. It can’t get any worse.”

“I try to be real active and read the possessions when I can hit the offensive glass,” Kelly said. “A lot of times it’s me getting back. Offensively I try to do a good job of laying my body on my man. I don’t get all the rebounds. But I do a pretty good job of making sure somebody else does.”

The Lakers have also cited Kelly’s lack of a physical frame as one of his weaknesses, but they also say he’s relatively bulked up since acquiring him. Kelly reported dropping his body fat percentage from 14 to eight for reasons including more time in the weight room, increased activity after rehabbing and adopting the Lakers’ diet program that promotes grass-fed food.

“Naturally it’s going to take him a while to get back in the swing of things,” D’Antoni said. “He’s just getting back to where he’s a pretty good player.”

Enough to start at least.

Kelly illustrated that moments later by pushing a cart full of equipment through a hallway and elevator to exit out of Air Canada Centre. But the 6’11” rookie from Duke has progressed plenty from when the Lakers drafted him with the 48th pick in the second round. He missed all of summer league and most of training camp stemmed from a surgically repaired right foot. Yet, Kelly hardly wavered in his confidence.