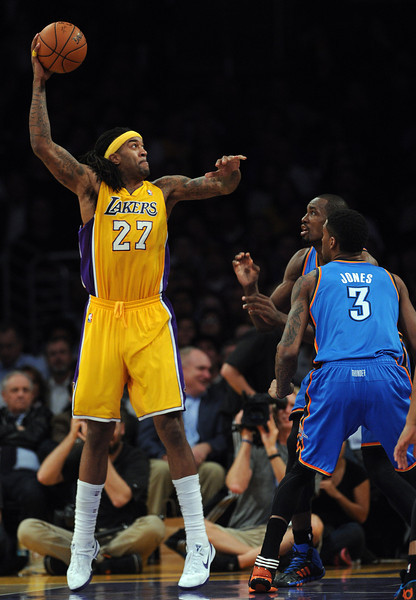 The Lakers’ Jordan Hill #27 shoots during their game against the Thunder at the Staples Center in Los Angeles Thursday, February 13, 2014.The Thunder beat the Lakers 107-103. (Photo by Hans Gutknecht/Los Angeles Daily News)

Although the Lakers engaged in preliminary talks about a trade that would send Jordan Hill to the Brooklyn Nets, the deal likely will not happen, according to a league source familiar with the situation.

The main reason: Brooklyn would absorb a $17 million luxury tax penalty for acquiring Hill’s remaining $3.5 million on his expiring contract. Brooklyn has some flexibility considering its $5.25 million disabled player exception could be used to absorb Hill’s contract. But that doesn’t erase the luxury tax implications. The Nets would then have shelled out around $190 million in combined payroll and luxury tax.

Nonetheless, it’s still possible Hill will be dealt before the Feb. 20 trade deadline.

Hill has averaged a dependable 8.5 points on 54.1 percent shooting and seven rebounds in 19.5 minutes. But he has faced inconsistent playing in part because Lakers coach Mike D’Antoni prefers floor spacers and shooters over bulky post players in his system.

Mitch Kupchak has “no regrets” on acquiring Steve Nash