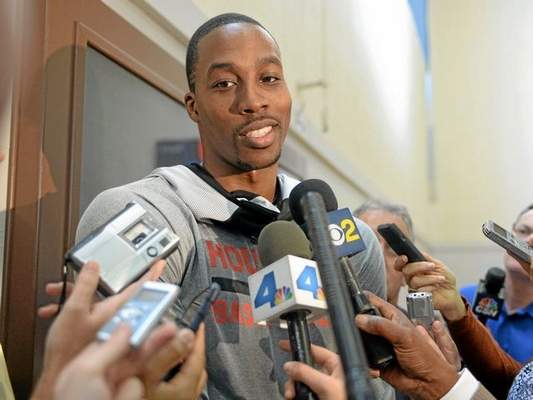 Rockets center Dwight Howard said Wednesday that he won’t engaged the fans when he returns to Staples Center to play the Lakers. Steve McCrank/Staff Photographer

Amid all the boos and personal insults hurled his way, Dwight Howard kept smiling.

He had spent his lone season with the Lakers in endless frustration for reasons involving his health (back, right shoulder) and role (personality conflicts with Kobe Bryant, philosophical differences with coach Mike D’Antoni). But as Howard weathered the negative backlash all season stemmed from his hasty departure from the Orlando Magic, Howard reveled in the jeers and even engaged with the fans who spewed venom at him.

That happened both when the Lakers visited Orlando and on several road games where his reputation stayed poor. But with the Lakers (18-35) hosting the Houston Rockets (36-17) tonight at Staples Center, Howard said he won’t adopt the same approach toward the Laker fans eager to yell an earful about leaving the purple and gold.

“I just want to play my game,” Howard said Wednesday following Rockets’ shootaround at UCLA. “We talked about what happened when I came back to Orlando and I got into it with some fans and some old teammates. There’s no need for that. This is a business and just play basketball. My decision had nothing to do with the fans or anything like that. They have to understand that. It’s not about them and the season went. I just had to do what’s best for me.”

The Rockets have already played the Lakers twice already this season in Houston. Howard also returned to Staples Center in November for a regular-season game with the Clippers. But amid those factors and the winning discrepancy between the Rockets and Lakers, does Howard draw extra motivation?

“We’ve had a long talk about the game tonight. We all just want to win,” Howard said. “The big picture is the championship and each game we ant to continue to get better. Tonight we have to stay close and tonight it’ll help us grow as a team.”

The Lakers hardly grew close together last season for a number of reasons.

“The biggest change in Dwight from last year to this year was his body,” Rockets coach Kevin McHale said. “Last year, he wasn’t healthy. When we got him in the summer, after we signed him, my biggest fear wasn’t that Dwight forgot how to play basketball. My biggest fear was his health. After we did all our initial testing on him, he was really deficient in a lot of areas. His left leg, back, flexibility, he had health deficiencies all over. He worked really hard all summer and I think he’s feeling better than he has in the last couple of years.”

Howard’s statistics look similar with the Lakers and Houston. But he has made steady improvement in his scoring from November (16.7 points), December (19.1), January (18.8) and February (25.8). McHale attributes to the uptick in the team featuring Howard better in the post.

“We work on post feeding. Our post feeding was really really bad. It’s like the guy who can’t throw the curveball. He throw sit everyday and then he gets a little better,” McHale said. “Dwight’s been great for us. We’re getting better playing with him and his numbers have been steadily going up. Earlier in the year, we had a hard time finding him. Our post guys have gotten away and a lot of guys haven’t played with a lot of post guys. Feeding the ball is a tough thing to do. We’re getting better at it and working at it. He’s been the beneficiary of us doing a better job of getting him the ball.”

And improved health, too.

“Mentally I tried to block all that out and play through it,” Howard said. “I tried not to focus on the injury itself or my legs or anything like that. I tried to focus on the goal, which is to win the championship. Last season, it wasn’t there at all. I didn’t have legs or nothing. I just played through it all because I wanted to win so badly. This year I’m a different place mentally and physically. It’s shown with my play and how I am off the court with my teammates.”

Lakers fans presumably don’t care about Howard’s development, anymore. Instead, they’ll be more invested in creating a toxic atmosphere for Howard anytime he touches the ball, attempts a shot or steps to the foul line. Howard vows he won’t pay attention.

“The only thing I can control is how hard I play and try to dominate the game,” Howard said. “I know the crowd is going to be amped. They’ll want the Lakers to beat us badly tonight so we have to do a good job of keeping the crowd out of the game and do it early.”